India is a country having people of different cultures, societies, religions and languages who interplay with each other harmoniously.  Independence to India is a great pride as it was obtained over years after facing a variety of obstacles and hurdles.  At that time, there was no permanent constitution of our country. 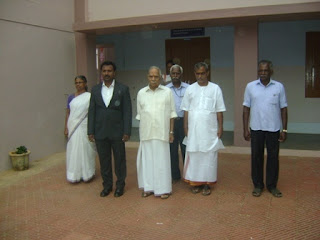 The first draft of the Indian constitution was presented by the drafting committee to the National assembly on 4the November in 1947.  The constitution of India came into effect on 26the January in 1950.  India was declared as the ‘Purna Swaraj’ country.  So every year 26th January is celebrated as Republic day. 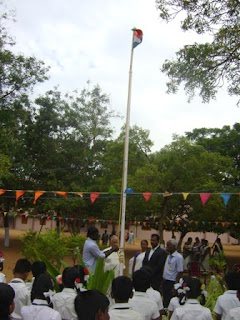 Master of ceremony by S.Bala Sindhuja of IX Standard. 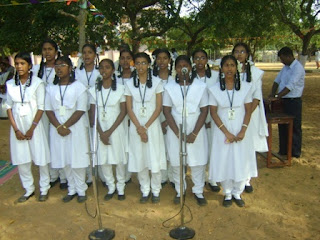 We initiated the programme with invocation song sung by the girls of IX Standard.
To pay respect to this day our National Flag was hoisted by Parameshwaranji, President of Vivekananda Kendra and National Anthem was sung by all. 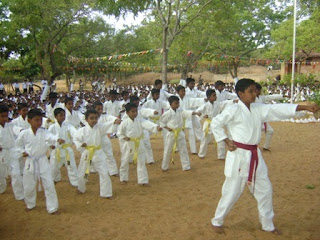 “The world is in need of those whose life is one of burning love, selfless,” says Swamiji.  Pledge was delivered by Ajay of VII Standard.  Welcome address was presented by Smt. Selva Nithya. 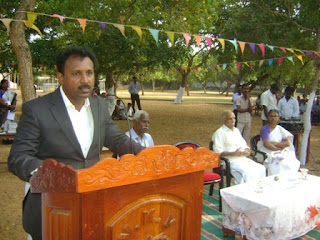 Music is an easiest way to reach the mind and thought of the people.  The glory of our country was presented in the form of a song by the girls of IX Standard.  Importance of the day was delivered by S.Punitha of XI Standard. 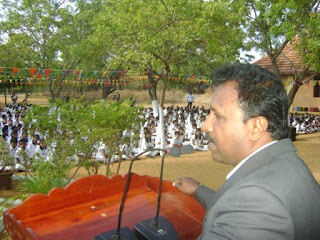 Karate is a great way to learn self defence, respect, Self control and patience.  Our students of V.K.V. expressed their self defence through karate.  A patriotic song in Tamil was sung by VIII and IX Standard girls. 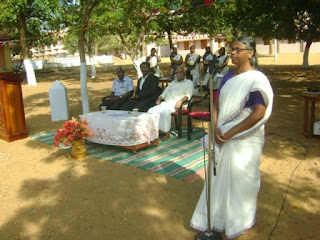 We had an eminent person Dr. T.Sasikumar, M.Tech., Ph.D., M.B.A., Principal of Lord Jegannath College of Engineering and Technology, Marungoor, addressed the gathering.  He felt proud that our school had produced great personality in all the fields.  He expressed his views about how India got Independence and Purna Swaraj and also about the sacrifice of great leaders who involved in it.  He insisted that the development of India lies in the hands of younger generation. 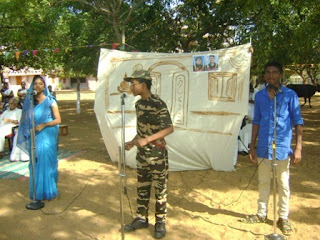 He then pointed out the benefit and disadvantages of technology.  He instructed that the students should take in only the good things from the social media.  He exhibited that how social media spoils the life of young students by spending their time in computer games rather that playing in ground.  He advised that the students should develop self confidence and morality.  Then he narrated a story about the life cycle of butterfly.  He instructed the students to respect their elders. 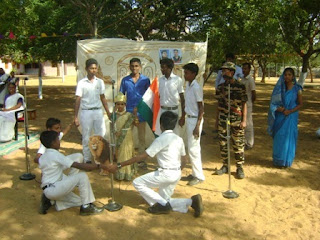 Drama is a way to realize an idea in the visual form.  Our students of V.K.V. expressed their patriotic spirit through the play. 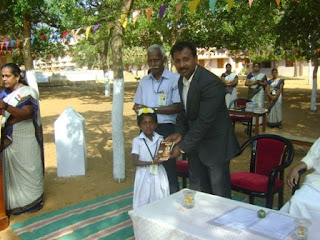 Mann. Radha didi, Dakshin prant sangatak of three states, addressed the audience.  She insisted that struggle makes a man strong.  She reminded that the future of our ‘Bharat’ lies in the hands of children.  She expressed about the visit of Swamiji to Chicago to spread the Sanadhana darma and about the hardship that he had undergone.  She instructed that all should develop patriotism, love and devotion towards our Motherland.  She exhibited that character of man shows which country he belongs to. 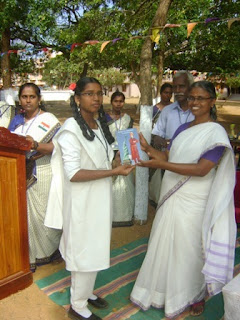 She pointed out that people living in India are different in culture, language and religion but they are interconnected and interrelated.  She advised that students to take an oath that they should conquer the world and spread the message of peace.  She then spoke about Mann. Niveditha didi, Vice president of Vivekananda Kendra and Vivekananda Rock Memorial, who was honoured by Padmashri award for the social work. 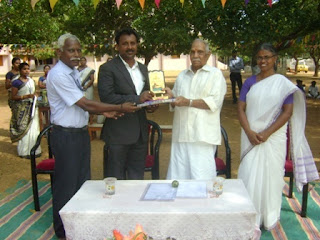 The talent of our children are brought out through various competitions.  Our children participated in the Extra-curricular activities enthusiastically and won the prizes.  Our teacher smt. Thanga Janaki read out the names.  Our honourable chief guest and Mann.Radha didi gave away the prizes to the winners.
Mann. Parameshwaranji, President of Vivekananda Kendra presented a memento to the honourable chief guest.
Vote of thanks was proposed by Smt.Kalai Selvi.  We concluded our programme with Kendra prayer.