One of the most important occasions in the history of our school calender is Universal Brotherhood Day. 51st Anniversary of the dedication of Vivekananda Rock Memorial to the nation and Universal Brotherhood Day was celebrated in our school on 11th September to commemorate the historic speech of Swami Vivekananda at the “World Parliament of Religions” held at chicago, America on 11th September 1893.

The festivity started at 3.30 p.m. in the Eknath hall with the GayathriManthra followed by the lighting of the lamp by Mann. D.Bhanudasji, General Secretary of Vivekananda Rock Memorial and Vivekananda Kendra and Mann. Krishnamoorthiji, jeevanvridikaryakartha and the editor of ‘Vivekavani’. Shri. R.Manikumar, teacher invoked the blessings of the lord through a prayer song. A warm welcome was offered to all the participants by our Pricipal Shri.S.AbrahamLingom.

Mann. D.Bhanudasji graced the function and delivered a power pact speech on the importance of the day. In his oration, he highlighted that each nation has a destiny to fulfil and we must prepare ourselves for the development of the nation. He quoted Swamiji who remarked “Each soul is pontentially divine” and instructed us to manifest the pontential divinity within us.

He recalled Eknathji’s hard work and perseverance in the construction of Vivekananda Rock Memorial that stands majestically in the midst of the sea. He advised us to bring God in ourselves for the unity in the nation. He also instructed us to understand, remember, bring Swami Vivekananda in our lives, convey his rich message and play a role as good citizens of our nation. Chicago address was presented by I.Bavin of XII Standard.Some of our teachers sang a song praising the glory of Swami Vivekananda. Mann. Krishnamoorthiji also showered us with the words like pearls on this happiest occasion. He illustrated that Swami Vivekananda, “the crest jewel of India” was not a saint who lived in the past but a living legend whose words still serve as a motivation for the people.

He quoted Swami Vivekananda who said, “In the future, people will not see a man as intelligent as the one who has given us Bhagavat Gita” praising the rich moral values found in it. He also referred the book “YezhuminVizhumin” where Swami Vivekananda ha instructed us to feed the starve and help him to stand on his own legs when he comes for the next time. He also advised us to bring out our hidden potentials to set forth a drastic change in the society.

The staff who had completed 10,20 & 30 years of service in this service oriented organization were honoured by our dignitaries. Vote of thanks was proposed by our Vice Principal ,Smt.K.G.Sariga followed by the cultural programme of our teachers and students. The day came to a fine end with Kendra Prarthana led by Smt. S.Kalaivani, teacher. The programme was compered by Smt. T.Maheswari, teacher.

Festivals educate, bring people together, break the monotony of routine and give us a chance to energise our body, mind and spirit. 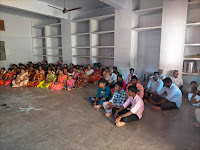 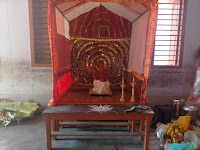 Ganesh Chathurthi is one of the Hindu festivals that marks the arrival of Lord Ganeshato the Earth who is considered the symbol of wisdom and the remover of obstacles. Ganesh Chathurthi was celebrated in our school on 10.09.2021 with the active participation of our Correspondent, Principal, Vice Principal & Teachers. We initiated the celebration sharply at 10 a.m. with 3 om’kars and shanthimanthra led by Shri. R.Manikumar, teacher of Vivekananda Kendra Vidyalaya. All the participants sang songs to fill the air with the divine blessings of Lord Ganesha.

Pooja was performed by Shri. R. Sundarakumar, teacher of Vivekananda Kendra Vidyalaya and flowers were offered to Lord Ganesha by all the participants. Finally the day came to an end with the distribution of prasadham.

to light the way for others”. 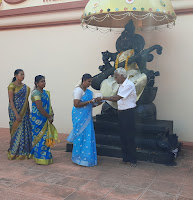 Behind every successful person, a teachers’ contribution is significant an notable. Teachers’ day is observed in India on 5th September, the birth anniversary of Dr.SarvepalliRadha Krishnan who was a philosopher, teacher the first Vice President of India and also the second President. We celebrated Teachers’ day on 4th September in our school. We initiated the celebration with 3 Om’kars and Shanti Mantra. Guru stothram was led by Smt. K.G.Sariga, the Vice Principal of VKV. 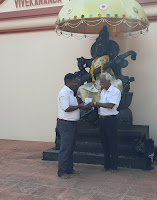 Our Principal Shri. S.AbrahamLingom delivered the teacher’s day message. He instructed the teachres to recall their teachers and get their blessings on this auspicious occasion who helped to mould their life and personality. He also advised them to be grateful to their parents for uplifting them to a higher position in life. Finally he honoured the teachers with sweets and shawl. It was really a wonderful day for all the techers.

“ Gokulashtami” celebrates the birth of Shri Krishna, the nineth avatar of Vishnu and “Rakshabandhan” glorifies the chaste bond between a brother and a sister.

On the very fine day of 31-08-2021, we celebrated the twin festivals Gokulashtami and Rakshabandhan in our school sharply at 3 pm presided over by Mann. Hanumanta Raoji, Vice President of Vivekananda Rock Memorial and Vivekananda Kendra. The master of ceremony was presented by Smt. Nalammal, Teacher. Smt. Saranya Teacher initiated the celebration with an invocation. Smt. Jeya Teacher delivered a speech on the importance of the day in which she highlighted Krishna’s life in the Brindhavan, importance of celebrating Gokulashtami and Rakshabandhan and the lesson we learn from Krishna’s life.

All the teachers sang hymn in praise of Lord Krishna to invoke his divine blessings. Some of our teachers gave vivid explanation on the avatars of Lord Vishnu. Mann. Hanumanta Raoji, gave a clear cut explanation of dharma and adharma. He focussed on the importance of selfless action in his oration and quoted Swami Vivekananda who said that Dharma is doing something for a noble cause without selfishness. He pointed out “ The Bhagavat Gita” that reveals Krishna as a great teacher. He suggested each and every teacher to be Shri Krishna himself. He instructed us to inculcate goodness within us like Shri Krishna and guide the students to lead the way of dharma.

As a part of Rakshabandhan celebration, Smt.Nalarani , Librarian tied the holy thread to Mann.Hanumanta Raoji and the Principal Shri. S.Abraham Lingom.Finally the celebration came to an end by Shanthi Manthra.