India celebrates the Republic Day every year on the 26th of January from 1950 when constitution of India came into force. Republic day in India has great importance in the history. It tells us all about each and every struggle of Indian freedom. India got Independence on 15th of August in 1947 and two and half years later it became a Democratic Republic.

This year 69th Republic Day was celebrated with pomp and show in our school. The function started at 8.30 p.m. The master of ceremony was by Kowsalya of IX Standard . On that happiest occasion, we initiated our programme by an invocation Vandhe Madharam sung by IX Standard girls. The flag was unfurled by Mann. Nivedita didi, Vice President of V.R.M. & V.K. This was followed by National anthem. The pledge was delivered by Jagatheesh of VIII standard .

We had an eminent person Shri. P.Natarajan, Inspector of Matriculation Schools, Tirunelveli as our Chief Guest and he addressed the gathering. He expressed that good behaviour leads to good life. Festivals and other celebrations are very important in our life. It leads to keep in the mind the olden things, tradition, etc. He spoke about the three stages of life namely, child hood youth and old age. The first stage, students should learn and acquire good things.

The second stage what we learnt that should be utilized carefully in adult hood. If we utilize the first and second stages properly the oldage will be happy and cheerful one. He shared the experience that the got in the school of Tirunelveli district. He insisted  the value of parents especially the fathers. He reminded us that the parents are the back bone of our life. Parents sacrifice their lives so that the children  shine in the world. He composed a poem in Tamil about our country. The students of VII and VIII Standard enacted Tamil drama and showed their patriotic spirit through the play  ‘Vanchinathan’.

Presidential Address was given by Mann. Nivedita didi, Vice President of V.R.M. & V.K. She expressed her views about the importance of the day. She shared her views about the education in India before the arrival of British after the arrival of Britishers. In 1823 the British collector conducted a survey regarding education in India. She exhibited that only 17 % of students attended the school. She spoke about the cruel treatment  of Indians under the hands of British. She reminded that how Indians rose against the British to get freedom. She illustrated a boy who studied in V.K.V. He completed his matric here and dropped out his education because of his poverty.

He worked as labour in the foreign country and later he became a Project Manager of a reputed company. She told about Dr. A.P.J.Abdul Kalam’s dream of becoming a developed country in 2020. She instructed that we should be the part of our family, society and nation. She insisted the students to raise our country through our sincere work. She explained about Karate which was originated in India. She appreciated the students who performed Karate excellently.

Smt.Selva Nithya, Teacher of V.K.V. read out the prize list of the E.A.toppers. The Chief Guest and Mann.Nivedita didi gave away the prizes for the winners.
Mann. Nivedita didi  presented a memento to the Chief Guest. Finally the programme was concluded with Kendra Prayer. 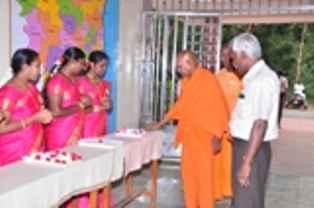 Vivekananda Kendra Vidyalaya celebrated its annual Day in a grand manner. It was presided by Mann. A.Bala Krishnanji, Vice president  of Vivekananda Kendra. The function started at 5.30 p.m. with the lighting of the ceremonial lamp by the honourable Chief Guest Sri. Yazdi Naoshirwan Karanjia, B.Com.,L.L.B.,D.Com, Principal of the Cambay Institute of Commerce, Surat and the Special  Guest Sreemath Swami Niyanmanandar, Ramakrishna Thapovanam, Thiruparaithurai. 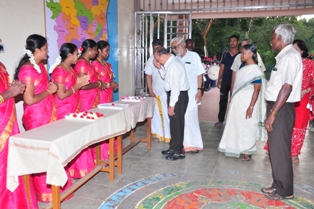 The programme was compered by Smt.P.Jeya,Teacher V.K.V. On that happiest occasion we initiated our programme by an invocation song sung by the students of V.K.V. Shri. S.Abraham Lingom , Principal of Vivekananda Kendra Vidyalaya extended a warm welcome to the dignitaries and presented the Annual Report. He read out the achievements of V.K.V. 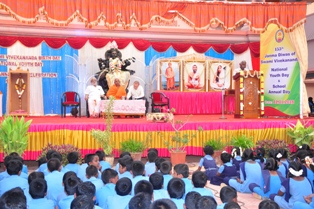 Sreemath Swami Niyamandar as our Special Guest addressed the gathering. He expressed that if a person wants to become the best artist, he should keep the best drawing infront of him and concentrate on the particular topic. Finally he will achieve the goal successfully. He reminded us about Swamiji’s Chicago Address and how he got applause in the parliament of America. He spoke about mankind, self confidence, creativity and knowledge. He told that the students should be active by doing physical exercise. He exhibited that the Gurukula system of education was replaced by the arrival of British in India. He was inspired by Swamiji’s principles and thoughts. He admired that even before 100 of years Swamiji has given his thought to this world. He instructed the students to help others and also sacrifice their life for our country. He advised the students to respect our nation and to spread its fragrance all over the world. 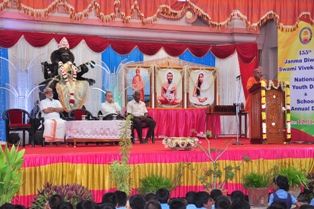 Vaman expressed her views about Cycle Rally which started from Pune and it was about ‘Clean India’. She spoke about Gurukula education which promotes the confidence of students and physical activities. She said that the students are trained to face the challenges in their life. She shared her views about the visit to historical and architectural and then places, the tradition of India and also  their experience in doing one thousand times of Surya Namaskar.She thanked V.K.V. for giving the opportunity to share it. 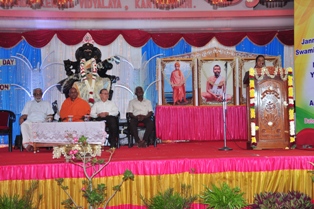 The Academic toppers as well as E.A. toppers were awarded prizes . The prizes were given by the Chief Guest and the Special Guest. Vasista house won the first place in the E.A. competitions.  The shield was presented by the Chief Guest to the Vasista incharges. Smt. Ishwarya Teacher of VKV read out the names of the winners. 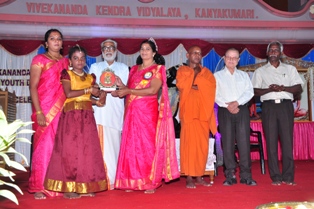 Sri. Yazdi Naoshirwan  Karanjia, Principal of the Cambay Institute of commerce as our Chief Guest addressed the audience. He sang a birthday song for Swamiji. He expressed his views about the simplicity and successful persons like Bala Krishnanji, Niveditha Didi and Radha Didi. He reminded us India is ‘Unity in diversity’. He spoke about Swamiji’s visit to Chicago in 1983 where he proved his religion. He expressed his views to save the religion and community of our country. He instructed us to serve humanity. He narrated some stories about mind and heart. He exhibited us when a person smile she will go near to lod. He quoted Swamiji’s powerful thoughts and narrated the incidents from Swamiji’s  life history. He spoke that the students are depending on internet and they are becoming like robbot and there is no affection in the family. He insisted the students to avoid media sources and unnecessary things. He wished the students to lead a cheerful life and be successful in their achievements. 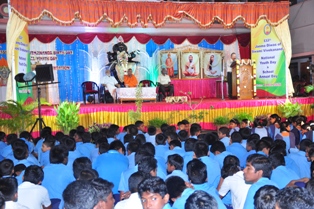 Presidential address was given by Mann. A.Balakrishnanji, Vice President of Vivekananda Kendra. He expressed his views about the National Youth Day. He spoke about karma yoga and lod has given us everything to make purposeful in our life. He narrated the incidents from the great epic ‘The Ramayana’. He exhibited that education must be based on Bharathiya Samschar. He reminded us education should build a good character, nation builders,discipline, etc. He quoted Swamiji’s thought “Serve man and Serve god”. He advised the students to serve the country with selfless service till the death of life. 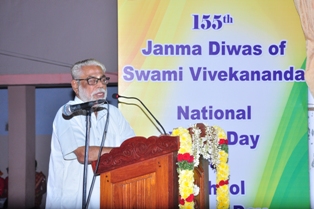 Mann. Bala Krishnanji presented the memento to the honourable Chief Guest and the Special Guest. Vote of thanks was proposed by Smt. K.G.Sariga, Vice Principal of V.K.V. The colourful cultural programmes were performed by our V.K.V. students. 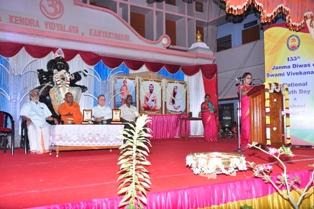 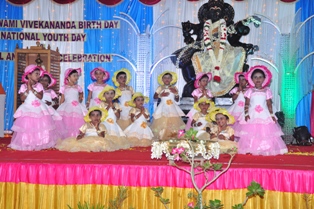