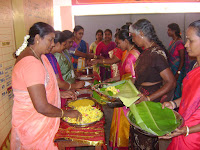 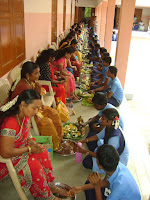 On March 19, 2020 around 45 mothers and students from X standard assembled in the premises of Vivekananda Kendra Vidyalaya and participated with great zeal in Mathru Pooja celebration. The event commenced at 3.15 pm. The celebration was initiated with three Ohmkaras’. 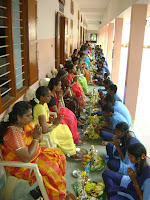 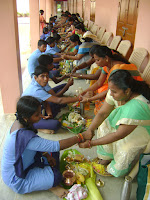 The students were followed the guidance given by Sri.R.Manikumar. Students performed the Mathru Pooja by offering flowers and chanting the slokas. As a part of the ceremony the children washed the feet of their mothers and applied chandan (sandal) and kumkum. They worshipped their mothers and got blessings with them. They also performed Aarathi. He explained the value of the mother. 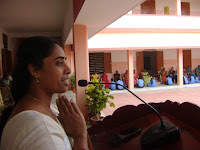 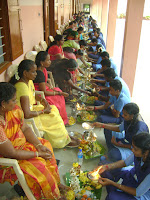 We were fortunate to have an eminent personality Dr.Savitha, Asst.Professor, Dept. of English, Sri Ayyappa College, Chunkankadai, addressed the gathering. She initiated her speech by singing the guru song. She insisted the students to get the blessings with their parent’s everyday. She explained about the reason of Shasti Viratham and why the mothers were doing that. She illustrated the mother’s value through some characters like mothers of Maratha King Chhatrapati Shivaji and Aathi Sankaracharya. She asked the parents to instruct about our culture to the children and to maintain it throughout their life. She also blessed the students to live a healthy life. 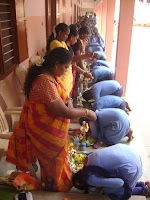 Some of the mothers and students shared their experiences about the importance of this pooja. 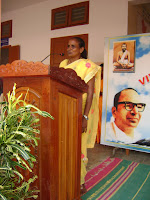 The students who came regularly to the school during this academic year were honoured by our Chief Guest Dr.Savitha. 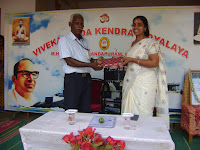 Our principal presented a memento to our Chief Guest. Vote of thanks was proposed by Smt.T.Sindhu. 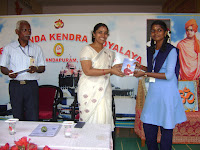 Finally, the celebration was concluded by Shanthi Mantra at 4.40 p.m.

CHIEF GUEST   : Sri. Anbarasu, M.Tech., Sub Inspector of Police , Kanyakumari.
PRESIDED BY  : Mann. HanumataRaoji., Treasurer, VRM & VK.
The most awaited ‘Sports Day’ was held on 6th march 2020 with great zeal and excitement in our school. The event commenced at 3.00 pm. The programme was compered by S.Pranya.
The event began with an invocation song by VII Standard students.
Welcome address was rendered by Abinaya of IX Standard.
Kum.M.Abinaya Lakshmi, Teacher of Vivekananda Kendra Vidyalaya delivered the speech on the importance of the day. 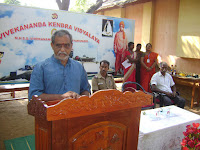 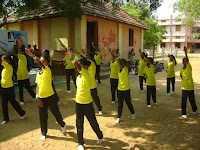 Aerobic exercise was performed by the students of VII and VIII Standard. 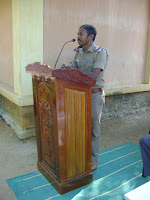 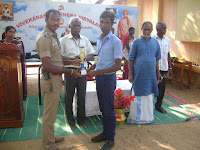 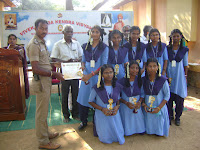 The students from LKG to X standard participated with great fervor and manifested their athletic skills with an unimpeachable finesse. The prize winners were a warded by our chief guest. The prize list was read by Smt.Sindhu Rani, Teacher of Vivekananda Kendra Vidyalaya. 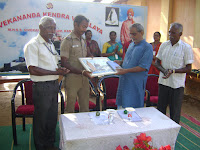 Mann.HanumantaRaoji, Treasurer of VRM & VK presented a memento to our chief guest.
G.Anto Joel of VII standard proposed the vote of thanks.Finally, the programme was concluded by Kendra Prarthana at 4.05 p.m. 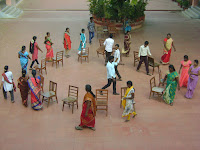 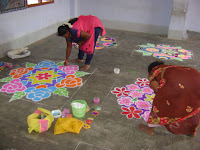 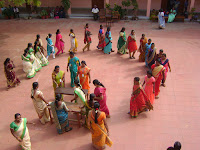 Chief Guest    : Dr.S.D.MillingTania,M.D.S.,
We celebrated “Mothers’ Day” on 22nd February 2020. Sri Rama Krishna Paramahamsa, the  Guru of Swami Vivekananda proclaimed his wife Saradha Devi as the embodiment of the Divine Mother.
The celebration started at 1.00 PM. The meeting was begun at 4.15 PM. The programme was compered by Smt.B.Geetha, M.A..,B.Ed.,
On that fine evening the programme was inaugurated by Dr.S.D. Milling Tania,M.D.S., 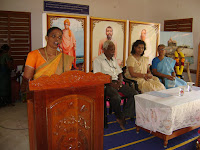 The invocation was sung by Smt.Meena Jothi.Welcome address was rendered by Smt.Bhagavathiammal. The importance of the day was presented by Smt.C.KrishnaKumari.Regarding Mothers’ Day celebration, music competition was also conducted. The devotional song was sung by the first prize winner Smt.LakshmiThangam. 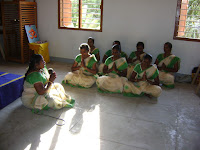 The Samskara Varga team presented a skit based on its activities.The participants shared their experience about the competitions and the celebration. 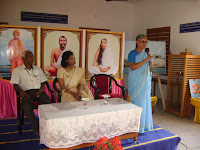 Mann.Radha Didi, Dakshin PrantSangatak VRM & VK addressed the gathering . She appreciated the team work of Samskara Varga and explained abut the value of it. She insisted the parents to start Samskara Varga in their own villages,so that the students grow as a fullledged individual. 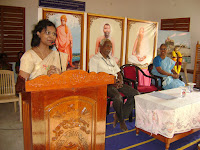 We were fortunate to have an eminent personality Dr.S.D.Milling Tania, M.D.S., the alumni of our school. She paid her respect to her teachers. She instructed the mothers to provide the balanced diet for their children to become physically and meantally strong. She advised the students not to skip the breakfast and take rest for at least 6 to 8 hours. She asked  the students to learn yoga and asanas. 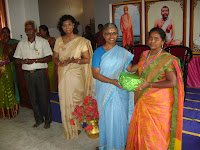 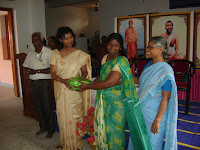 Sri Ramakrishna Paramahamasa says that, “Women are the veritable image  ofShakthi” According to his quote, various competitions were conducted to bring out their hidden talents. The winners were honoured by our chief guest and the special guest. Smt.K.R.Ishwarya, Teacher of Vivekananda Kendra Vidyalaya read out the prize list. 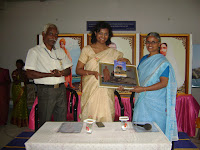 Mann. Radha Didi presenteda memento to our chief guest. The vote of thanks was proposed by Smt.TheivaJeya Jothi. Finally the programme was concluded by Shanthi Mantra at 5.55 PM.

On the auspicious morning of 26th January 2020, we celebrated the 71st Republic Day in our school premises.  The event began at 8.30 a.m.  It was compered by Kavinthra Sree of VIII Standard.

The celebration was initiated with an invocation “Vandhe Madharam”, which was sung by the students of Vidyalaya.

Sri.Selvan, Teacher of Vivekananda Kendra Vidyalaya welcomed the gathering.VII and VIII Standard students sang a patriotic song in our national language.S.Selva Serin of VIII Standard delivered an English speech about the importance of the day.

The Students of Vidyalaya exhibited their talent through Karate and Silambam for developing balance, co-ordination, focus, respect, discipline and self-defense.IX standard girls sang a patriotic song in our mother tongue.The students of VII standard showed their love for nation through their dance performance.

We had an eminent person Dr.Elamkumar, Professor and Head of the Department of Tamil, Vivekananda College, Agasteeswaram who addressed the gathering.  He started his speech with Ganapathi Song.  He explained about “Sarvodhaya Movement”.  He quoted one of the National Leaders Sardar Vallabai Patel’s courage and service to our Nation.  He explained about ‘Guru Bakthi’.  He asked the students to give respect to their guru.  He also remembered his Guru and his words.  He illustrated the Guru Bakthi of Ekalaiva.  He quoted the Kural from the chapter of ‘Education”.

The Students of VII and VIII presented the skit on Dheeran Chinnamalai, the Tamil Chieftain and Palayakarar of Kongu Nadu who fought against the British East India Company.

Mann.Balakrishnanji, Vice President of VRM & VK president of the function presided over the function.  He highlighted the significance of the day.  He asked the teachers to utilize this 50th Anniversary of Rock Memorial.  Teachers should take response to spread the story of Rock Memorial towards the parents and the public.  This work should do done by the team of Vivekananda Kendra Vidyalaya teachers.  He illustrated Swami Vivekananda’s life and message.  He advised the students to do their work with ‘Thiyaga’ and ‘Seva’ minded.  He insisted the teachers should pass patriotism, Indian culture, spiritualism, service in mind and good character in the student’s mind.  He insisted the students to be a role model to the society.

The E.A. toppers were honoured with prizes.  The prizes were given by our guests. Kum.Bharathi, teacher of Vivekananda Kendra Vidyalaya read out the prize list.

Mann.Balakrishnanji, Vice President of VRM & VK presented a memento to our Chief Guest.
Sri.Haritharan, teacher of Vivekananda Kendra Vidyalaya proposed the vote of thanks.

The programme was concluded by Kendra Prarthana at 10.20 a.m. 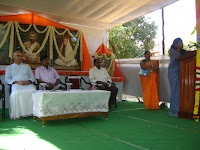 On this happiest occasion the programme was inaugurated by our honourable Chief Guest Sri. M.Raman, M.Sc., B.Ed., Chief Educational Officer, Kanyakumari by lighting the lamp followed by other dignitaries on the dias.  The celebration was initiated with an invocation song sung by the students of Vivekananda Kendra Vidyalaya.  Sri. S.Abraham Lingom, Principal, Vivekananda Kendra Vidyalaya presented the welcome address and school Annual Report.

The academic toppers as well as extra curricular activity toppers were honoured by giving prizes. The prizes were given by the chief guest and the special guest. Smt. Suba, Teacher of Vivekananda Kendra Vidyalaya  read out the name of the winners.  We had an eminent person Sri. M.Raman, M.Sc., B.Ed., Chief Educational Officer, Kanyakumari as our chief guest and he addressed the audience. He asked the teachers to mould the students like Swami Vivekananda . He appreciated our school for giving opportunities to participate in different competitions. He praised the singing talent of the students. He asked the principal to take steps to develop the sports and games. He illustrated Swamiji’s life and advised the students to follow the ways of Swami Vivekananda.  The students of VIII and IX standard sang a Tamil song about Swami Vivekananda.  Selvi. Pon Supriya., I.R.S., Deputy Commissioner, Customs and Indirect Taxes, Tiruvananthapuram  as our special guest, addressed the gathering. She thanked Vivekananda Kendra and her teachers as the alumni of Vidyalaya.She reminded her childhood experience in Kendra.She advised the students to select their aims first. She quoted the saying of Swamiji, “Arise Awake and stop not till the goal is reached”. 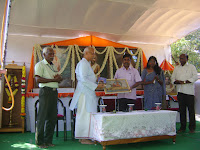 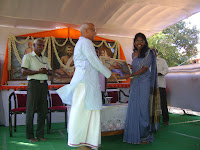 Mann. D.Bhanudasji., General Secretary., VRM & VK, President of the function presented the memento to the chief guest and the special guest.

Vote of thanks was proposed by Smt. K.G.Sariga, Vice Pricipal of Vivekananda Kendra Vidyalaya.

The programme concluded with Shanthi Manthra at 5.15 p.m.