Shri. Eknath Ranade was born on 19 Nov. 1914 at Timtala in Amaravati district of Maharastra.  His parents were Ramakrishnarao Ranade and Ramabai.  After his studies he started devoting more time on sangha work.  He was deeply attracted towards the words of Swamiji. 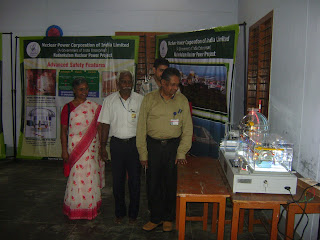 He felt that a truest memorial to Swamiji should reflect to words and deeds of swamiji and be a living testimony to his idea of India. After the construction of Rock Memorial he established various organisations for the benefit of the people.  As a tribute to great soul his birthday is celebrated as Sathana Divas. 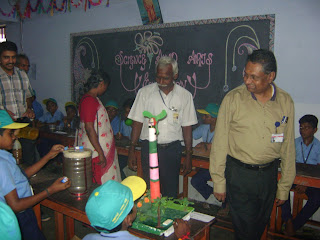 Master of ceremony by Mariya Sajeeba of XI Std. 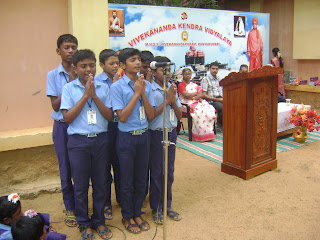 We initiated the programme with prayer song sung by VIII Std boys.  The welcome address was delivered by Solai Kesavan of IX Std. The importance of the day was presented by Naveen Kumar of IX Std. 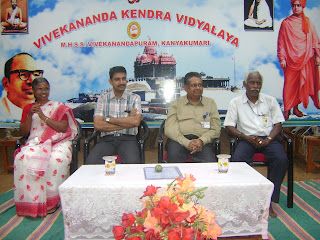 The Presidential address was delivered by Mann. Radha Didi, Dakshin Prant Sangatak of VRM & VK.  She expressed that Eknathji had done a big sadhana and as a son of our motherland he dedicated himself to Swamiji’s words.  She exhibited that various organisations were found by Mann. Eknathji for the welfare of the people.  She shared with us about the fancy dress competition and how the children performed infront of the audience with confidence. 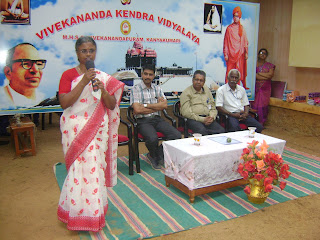 She reminded us about various schools and organisation of Vivekananda Kendra all over India.  She instructed that man should stand on his own feet, there is God within ourself and it should be found through education.  She inspired us by the thought of Swamiji “Serve man to serve God’.  She adviced the students to live for others, to be a good children and to develop their personality. 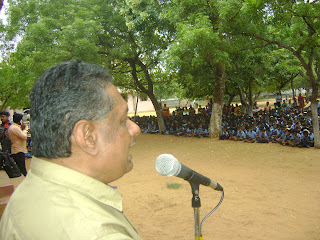 The boys of VIII Std sang a beautiful song of our Motherland.
The Chief guest Shri. R.S.Sundar, Site Director of Koodankulam Nuclear Power Project addressed the gathering.  He expressed that he feels happy to see the students’ participation in the science and Arts exhibition. 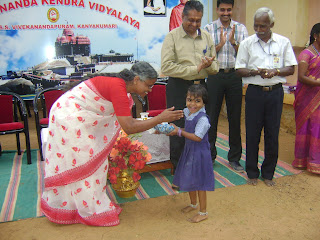 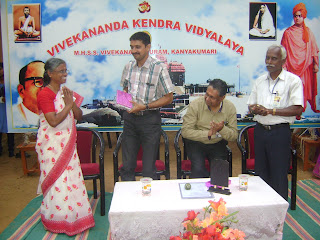 Due to Children’s Day celebration various competitions were held in our school and the prizes were distributed by Mann. Radha didi, Chief guest and special guest to the children who performed well. 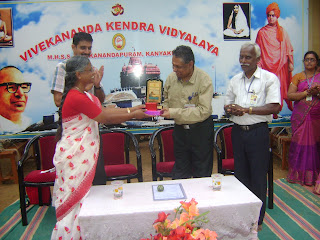 Mann. Radha didi presented the memento to our chief guest Mr.R.S.Sundar, site director of Koodankulam Nuclear Power Project and to our Special guest Mr.Deva Prakash, Manager public awareness.
The Vote of thanks was proposed by Atchaya of IX std.
We concluded our programme with Kendra Prayer.

Children’s Day is celebrated every year to pay tribute to all the children all over the world.  14th November is the birth anniversary of Pandit Jawaharlal Nehru.  His birthday is celebrated as children’s day because of his great love and affection towards children.  They are considered as the building blocks of the strong nation. 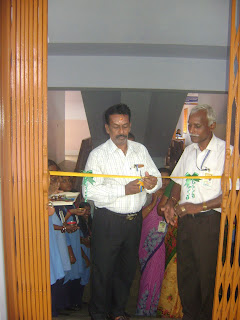 As the beginning of the programme the invocation song was sung by VII std boys.  Welcome address was delivered by Infant Lishny of XI Std.  Importance of the day was presented by Selva Subin of XI Std. 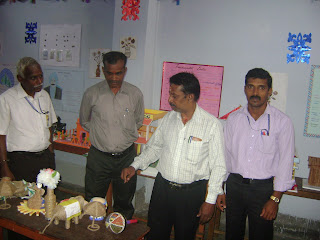 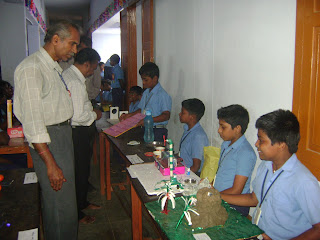 The presidential address was delivered by Man. Krishna Moorthiji, Editor of Vivekavani.  He expressed that this is the scientific world and in this world we can get things easily but during the olden days it was difficult to get even a bowl of rice.  He told that, when a doll is given to the child, at first the child splits the doll into pieces and then tries to join it due to common sense. 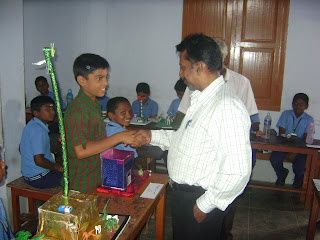 He reminded us about Venkatrama’s speech in the music academy at Chennai on 01.01.2016.  He said that music plays an important role on Science.  He also noted that Einstein was a scientist but he liked to play violin very much.  He then recalled the incident happened in Hiroshima.  He shared a few words about the great scientist Dr. A.P.J.Abdul Kalam, when he was asked to look at the trees he was able to see only the tissues of the tree. 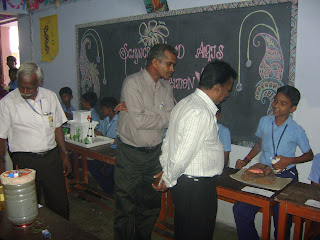 He spoke about Jawaharlal Nehru, when he was imprisoned for nine years he felt sad because he was not able to hear the children’s voice and their laugh.  He reminded us about a debate based on the topic Urban Vs Rural.  He instructed the students to work hard and wished them to become like the great scientist and adviced them to help the people by providing the facilities needed to them and asked to eradicate poverty. 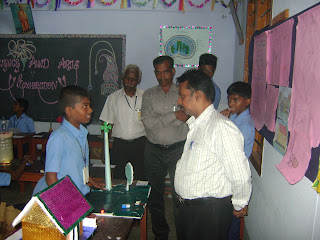 It was followed by a group song sung by VII Std girls about the importance of Children’s day. 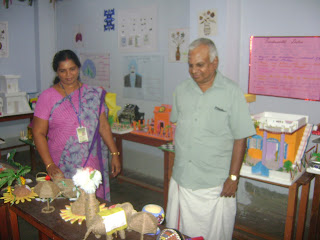 The chief guest addressed the audience.  He shared his past experience.  He expressed that life is to live, school and teachers guide us how to live.  He inspired us by splitting the name of Swamiji.  He told that clever people work hard continuously and they get victory by their deep thinking to achieve a fruitful life.  He shared a few incidents from his days about the hand written magazine. 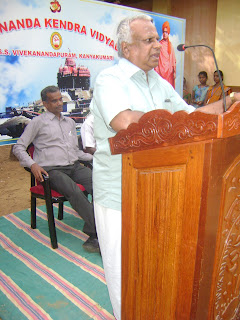 He admired the science and arts exhibition and the children’s contribution to it.  He encouraged the students who got high mark in the quarterly exam in X std.  he adviced the students to work hard and asked them to spread the fame of our school by getting good marks in the Annual Exam. 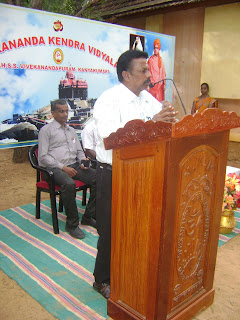 He instructed the students to plan well and make use of their teacher to achieve their aim.  He adviced the student to respect and obey the elders and asked them to reduce their anger and to be patient.  He wished them to get good marks in the final examination. 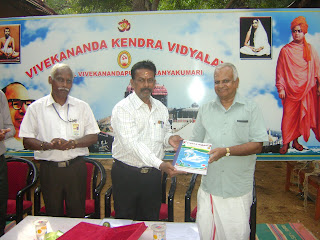 Man. Krishnamoorthiji, presented the memento to our honourable chief guest.  Vote of thanks was delivered by Preethika of IX Std. 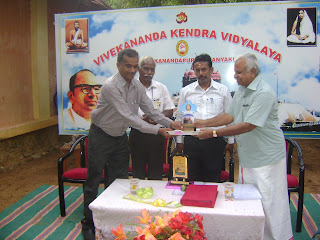 We concluded the programme by Kendra Prayer.