August 15, 1947 is a memorable day for all Indians to rejoice and remind the great struggle undergone by our freedom fighters.  The final glory of receiving Independence to breathe the free air of freedom.  Every year after Independence we commemorate this auspicious event to pray our reverence to our motherland and the freedom fighters.As Swami Vivekananda says “ Celebration is not a theoretical need but a practical necessity.”  We followed this saying by celebrating the Independence day in all the corners of our country.  To pay our tribute to such a wonderful day, our school Vivekananda Kendra Vidyalaya Matricuation Higher Secondary School, Kanyakumari celebrates Independence Day each year on 15th August with enthusiasm.  We have successfully celebrated our 69th Independence day on this year 2015.
On that happiest occasion we initiated our programme by invocation “Vanthaematharam”. 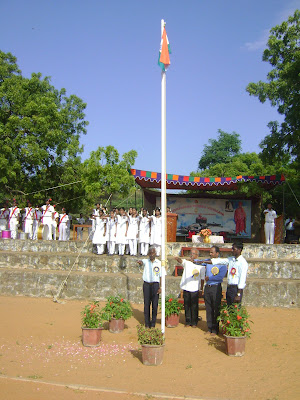 Our tri-coloured national flag was unfolded by the distinguished chief guest Sri.EM. Shankar.  Raising the flag brought about a feel of pride and thought of response that each and every citizen of our country must have to bring further glories to our country.  A warm salute was marked to the flag from all the students, teachers, parents and dignitaries on the dias.
National Anthem “Jana Gana Mana” echoed through the air kindled zeal of patriotic spirit through the veins.
A promise for the nation’s well being and prosperity was made through pledge.  Students did the oath saying that they shall be worthy and bring fame for the nation on all prospects.
“A hearty welcome is the best cheer.”  To make the function a delighted one welcome address was delivered by our Hindi teacher, Kum. S.Kalpana Parvathy. 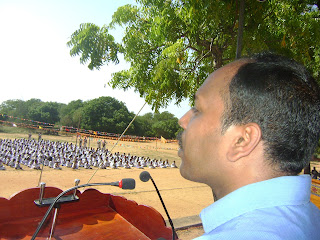 “Sound mind in a sound body.”  As per this statement to keep the mind and body in a healthy manner, a mind blowing mass drill was uniformly performed by our VKV students.

Swamiji says “Music is the highest art and to those who understand, is the highest workship.”  Such a divine worship to patriotism was done by singing a melodious song with a short musical composition in our national language by IX standard students of VKV.

A fantastic speech in English was delivered by G.S.Vaishnavi of IX standard about the importance and the message carried by the 24 spokes of
Ashoka Chakra.  The spokes represent that vigilance, truth and loyalty, perseverance and justice.
To bring in remembrance the struggle of freedom, shed of blood and the sacrifice of lives of our national leaders to make India free from the tyrannical clutches of British Kingdom was executed through a excellent and original dramatical tamil play “chinnamalai” by brothers and sisters of 7th, 8th and 9th standard.
Sister S.R.Abbiramy of VIII std delivered a vivacious speech highlighting the importance of celebrating Independence Day with a spontaneous overflow of words in our national language.
A wonderful visual and auditory feast was staged through the combination of dance and music respectively by the colourful blossoms of our VKV.
Chief Guest of the day Sri. EM.Shankar, Ex-student of V.K.V. is really to be glorified personality by his limitless achievements.  He is working as Associate Professor, Department of Microbiology, Faculty of medicine, Malaysia.  Currently he has been honoured by the Associated Editor, BMC Immunology, London.  He has also published 77 papers.
Chief Guest introduced his speech with Guru Mantra.  Being an old student of VKV had been a privilege.  His address for the students was to bring about a tremendous change by which the nation could go to heights.  He mentioned the saying “East or West India is best.”  He also said that India is the only country in the world to have real freedom in which each citizen enjoys the true love of motherland.  He also mentioned the words of Subash Chandra Bose about freedom that is “Freedom is taken, not given.”  He appreciated the students for performing the wonderful drama.  He pointed out that “Heaven is under the feet of mother”.  So is motherland too.  His speech was an inspiration for all the listeners.  It was a thought provoking speech to be praised forever.
To spread the fragrance of freedom, to fill the sky with the beauty of motherland’s Independence, to smooth the ears with the love for nation a beautiful tamil song was sung by 7th and 8th standard students of VKV.
Sound of drums and flutes heard high with the impressive steps and turns made by the brothers of band that filled all the spectators with extreme joy and enthusiasm.
Administrative officer of VRM & VK Sri. Krishna Swamy spoke on the struggle undergone by freedom fighters to attain freedom.  He highlighted the efforts laid by Mann. Eknathji Ranade to freedom struggle by educating people in remote places like Assam, Arunachal Pradesh, Nagaland and Andaman Nicobar.  Today VKV has 70 schools all over India.
Success is not an easy endeavour.  Every fraction has to be used purposefully.  Effort of a person is regarded only when the superlative form is achieved.  When one’s talent is acknowledged as superior, the person is awarded.  Prize is a symbol of honour, I tis given to motivate the winners to hold on their success and to receive more in the upcoming contest.  Teacher Kum. P.Babitha readout the prize list and the students received the prizes from the chief guest.
Memories lasts forever when they bring a happy remembrance in one’s life.  Memento is such a symbol to make remember the happiest time spent by the Chief Guest in our school’s Independence Day.  A memento of remembrance was handed over to the honourable Chief Guest by our respectable Pricipal.

William Shakespeare says “All is well, that ends well”.  As the program had wonderful beginning and a series of well defined events simultaneously, the end was also a remarkable and rejoicing one.  Vote of thanks was delivered by our English Teacher Smt.Siva Selvam thanking all the kind hearts for their support and calmness throughout the function.

The end of the programme was a successful one by the hard work, effort and co-operation of all the people.  The peak was reached by the immortal help of everyone.  That was the right time to thank the almighty and still seek His blessings.  Kendra Prayer was sung pleasantly to windup the programme.

Email ThisBlogThis!Share to TwitterShare to FacebookShare to Pinterest
Labels: 1947 is a memorable day for all Indians to rejoice and remind the great struggle undergone by our freedom fighters., August 15, INDEPENDENCE DAY CELEBRATION 15.08.2015
Location: Kanyakumari, Tamil Nadu, India

On 31st evening of July we celebrated ‘Guru Poornima’ in a grand manner.
It is the day when Sri Vyasa is revered as Guru is known as Guru Poornima day.  The word ‘Guru’ has two syllables in which ‘gu’ means darkness or ignorance and ‘ru’ denotes the one who removes it.  The Guru provides the light of knowledge that makes a disciple ‘see’ the supreme self.  He removes the ignorance caused by ego through the use of medicine called knowledge.  Sri Vyasa has done unforgettable service to humanity all time by editing the four Vedas, writing the 18 Puranas, the Mahabarta and Srimad Bhagavata.  It is because of Sri Vyasa that our Vedic knowledge survives and importance of guru tradition got established.
On that happiest occasion we initiated our programme by an invocation.
“A hearty welcome is the best cheer” Welcome address was presented by Raja Ramya of IX standard.
Babishini of IX standard delivered a speech in Tamil about the importance of the day.  She explained  the story of Veda Vyasa.  She quoted so many incidents from the life of Veda Vyasa.
“Music is the highest art, and to those who under stand, it is the highest worship”.
A pleasant song was sung by VIII standard students of V.K.V
The chief guest Sri.Thapasvi Pon Kamaraj, Founder of Yogi Ram Surath Kumar Manthralayam, Kaanimadam, distributed the award for the teachers who produced the centum result in the previous academic year.
The prize list was readout by Kum. Kalaivani teacher of V.K.V.
Chief Guest sri. Thapasvi Pon Kamaraj Founder of Yogi Ram Surat Kumar Manthralayam, Kaanimadam, addressed the gathering about the importance of the day.  He defined the word ‘Thathriya’ that is Brahma, Shiva and Vishnu.  He explained an incident that happended in Malaysia.  He insisted the students to follow the ideas of those people and to have a definite aim and work hard to achieve it.
Christhu Yuvance of VIII standard delivered the speech in English about the importance of the day.
Special Guest Mann. Hanumantaraoji, Treasurer of Vivekananda Kendra addressed that the teachers are the masters who help the students to pronounce, to speak in a correct way.  He felt proud about the state rank.
Some of our well wishers of Vivekananda Kendra have offered scholarships to our students for their meritorious performance in the examinations and to give hands for their education.
The chief guest Sri. Thapasvi Pon Kamaraj handed over the scholarship to the students.
Special Guest Mann. Hanumantaraoji, Treasurer of Vivekananda Kendra presented a memento to our honourable chief guest, Sri Thapasvi Pon Kamaraj.
Archana of VIII Standard presented the vote of thanks.
The programme was concluded by our ‘Kendra Prayer’.
at 12:54 No comments: