"Art is the child of nature in whom we trace the features of the mother’s face”.  A mother is the most precious person in the life of everyone.  She is like true nature who always knows only to give.  She is the first teacher who teaches at every steps of life. 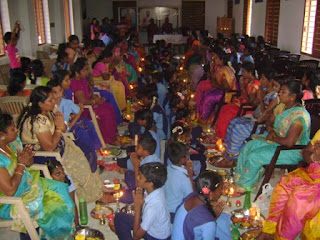 Shri Ramakrishna Paramahamsa was born on February 20 in 1836.  His wife was Saradha Devi.  He was the Guru of Swami Vivekananda.  He was given to a spiritual ecstasies from young age and was influenced by several religious tradition. 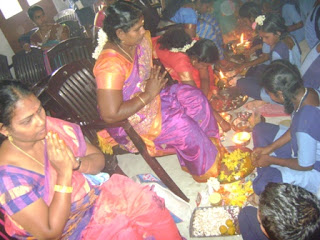 He treated all the women including his wife as a mother. So in our school, the birth anniversary of Shri. Ramakrishna Paramahamsa is celebrated as ‘Mother’s Day’.
The programme was inaugurated by Smt.Sathiya Valli, Coordinator of Govt. Museum, Kanyakumari by lighting the lamp. 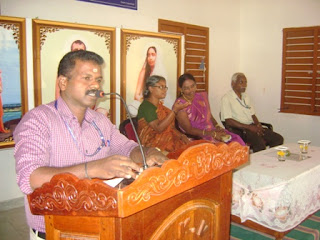 Shri. Manikumar, sir expressed his views about the importance of ‘Mathuru Pooja’.  Our school students participated in Mathuru Pooja and performed the pooja for their mothers by chanting the slogans. 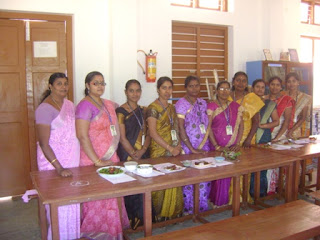 Master of Ceremony by Smt. Mohana Sundari.  The invocation song was sung by Smt. Meena Jothi.  The welcome address was delivered by Smt. Subbulekshmi.  “God on the Earth is Mother”.  The importance of the day was presented by Smt.Anuja Devi. 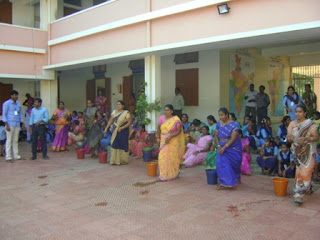 Mann. Radha Didi, Dakshin Prant Sangatak, VRM & VK addressed the audience.  She shared her views about mathuru pooja.  She exhibited that ‘Mother is the first God’.  She reminded us that ‘Everything in the world is mother’ and the name of country and rivers are also called as Matha. 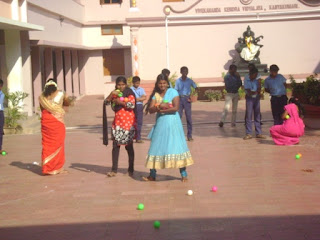 Then she expressed about the sacrifice, suffering and pain of the mother during the birth of the child.  She insisted that even the Army soldier would return to his house when his mother was in a serious condition.  She narrated us a heart touching story of an affectionate mother.  She instructed that all should take care of their parents and advised them to give respect to their elders. 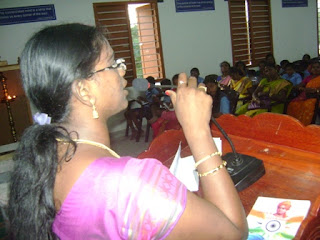 A melodious song was sung by Smt. Lakshmi Thangam.  Some of the mothers who participated in the competition and games shared their experience.  Various competitions like Rangoli, Singing, preparing healthy food, musical chair, collecting the balls were conducted in our school for mothers. 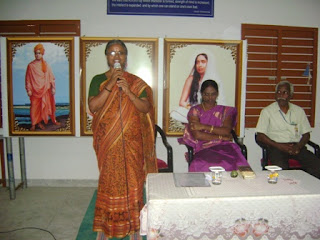 They participated in it eagerly and won prizes.  The name lists of the winners were readout and our honourable special guest and chief guest gave away the prizes to the winners. 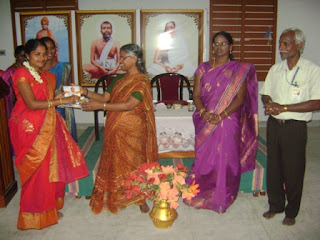 Our honourable chief guest Smt.Sathiya Valli, coordinator, Govt. Museum, Kanyakumari addressed the gathering.  She congratulated all the mothers who actively took part in the games.  She expressed that she was able to see the brightness in the face of the mothers when their children performed the mathuru pooja.  She shared with us about her childhood days.  She reminded the good qualities of a mother.  She pointed about the importance of healthy food. 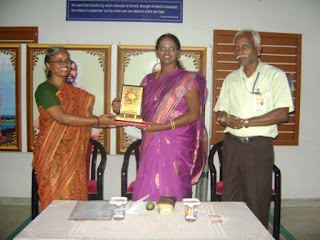 “A sound mind is a sound body” means there should be a well working mind in the fit body in order to go ahead and get success in life.  The great virtue of sports teaches everybody to acquire the will to win.  Sports help to maintain mental balance in the midst of hopes and despair and how to tackle the difficult situation. 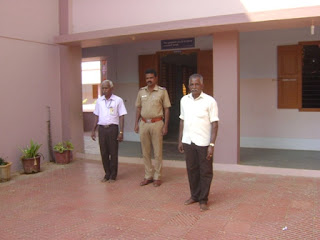 Sports teach discipline and continuity in the work to get the goal.  It helps in developing mental and physical toughness.  It gives strength and improve our capability.  It is an integral part of education. 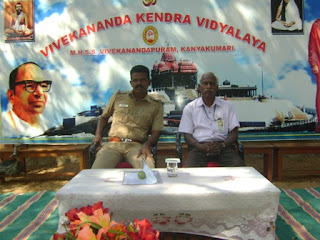 The master of ceremony by S.Pitchammal of IX Standard.
We initiated the programme with the invocation song sung by VII and VIII standard boys.  The welcome address was presented by Abisha of XI standard. 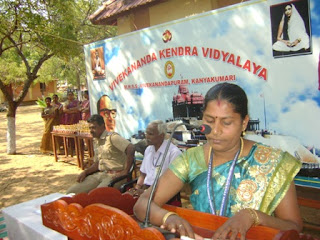 Sports and Yoga have great value in life.  It helps in character building.  The importance of the day was delivered by Smt. Vijaya Nirmala, Teacher of Vivekananda Kendra Vidyalaya. 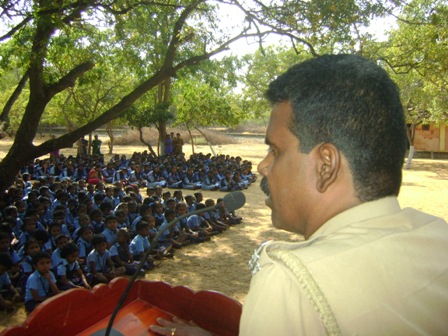 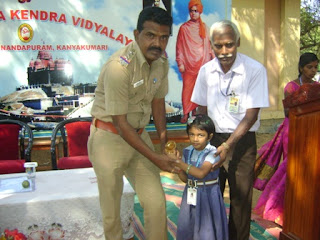 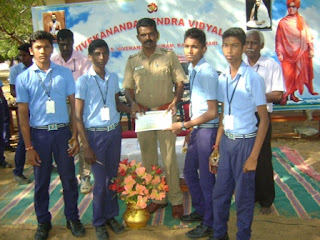 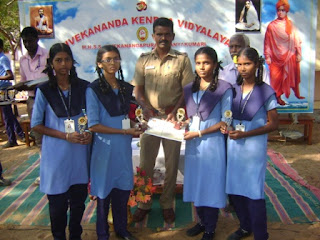 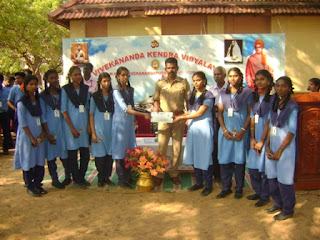 Various sports like running race, relay, kho-kho, shot-put, kabadi etc were conducted in our school.  The name list of the winners and runners in the games were readout by Kumari.Menaga Devi, teacher of Vivekananda Kendra Vidyalaya and the prizes were given away by our honourable Chief guest L. Saravana Kumar, Inspector of Police, Kanyakumari.

Our respectable Principal presented the memento to our honourable Chief guest.  Vote of thanks was delivered by Dharshini of XI Standard. 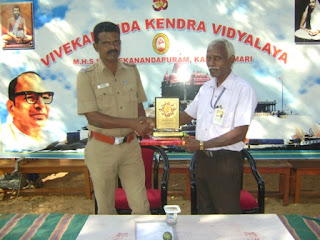 We concluded the programme with Kendra Prayer.