Eknath Ramakrishna Ranade,popularly referred to as Eknathji, was a social activist and leader,president of Vivekananda Rock Memorial committee and Vivekananda Kendra , kanyakumari. 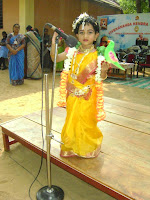 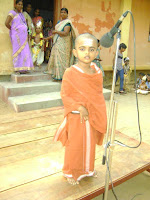 Shri.Eknath Ranade was born on 19th November 1914 at Timtala in Amaravathi district of Maharastra. His parents were Ramakrishnan Ranade and Ramabai. He was deeply attracted towards the words and deeds of Swamiji and a living testimony to his idea of India. After the construction of Rock Memorial, he established various organizations for the benefit of the people. As a tribute to great soul, his birthday is celebrated as ‘Sathana Divas’. In our school 104th birth anniversary of Mann.Eknathji and final day of Science and Arts Exhibition was celebrated in a grand way. Master of ceremony by S.Abinaya of XI Std. 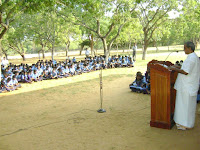 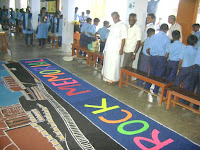 We initiated the progaramme with prayer song sung by VI Std boys. The welcome address was delivered by Ashmitha of XI Std. The importance of the day was presented by Akshwin of IX Std.
Due to Children’s day celebration, various competitions were held in our school.Many students participated and won the prizes. 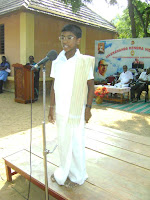 Sree Mathura of U.K.G. and Vishnu of III Std won the first prize in Music competition and they sang the prize winning song infront of the audience.
The presidential address was delivered by Mann.Hanumanta Raoji,Treasurer of VRM & VK. 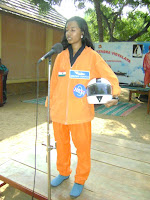 He spoke about the 104th Birth Anniversary of Mann.Eknath Ranade. He shared the special qualities of Eknathji. He expressed that Eknathji was a man of dedication, discipline, perfection, punctuality and perseverance. He exhibited that Eknath was punctual and perfect in all the work. He mentioned about Eknathji’s arrival to Tamil Nadu and the way he became one among the people of Tamil Nadu. After the construction of the, Vivekananda Rock Memorial Kanyakumari has become famous all over he world. Even though he was unfamiliar with the language of Tamil, he accomplished his task successfully. He suggested the students to follow the qualities and principles of Eknath Ranade. 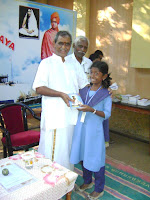 The students of VIII Std girls sang a patriotic song. M.S.Harshika of XII Std won the first prize in elocution competition and she exhibited her views about Kalam’s involvement in science infront of the audience.
Smt. Kalpana Parvathi, teacher of V.K.V. read out the winners name list and the prizes were distributed by Mann.Hanumanta Raoji to the children who performed well.The vote of thanks was proposed by Revathi of IX std. Finally the programme was concluded with our Kendra Prayer.

The world may remember him as the first Indian Prime Minister and a skilled politician, but for children he was Chacha Nehru. Children always affectionately called him as Chacha. Chacha in Hindi means ‘Uncle’. He believed that children must be provided with love and care as the future of a nation lies in their hands. This day is dedicated to children and every body tries their best  to make the children happy on this day.

Children’s day celebration was celebrated in a grand manner. On that happiest occasion we initiated our programme by an invocation song sung by VI Standard students of V.K.V. The welcome address was presented by Manju of XI Standard student. 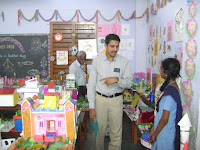 Science and Arts exhibition was inaugurated by Sri J.Deva Prakash, Senior Manager,HR,Nuclear Power Project,Kudankulam and Mann.Radha didi, Dakshin Prant Sanghatak,VRM & VK.
Mathi Vathani of VIII Standard delivered the speech in English about the importance of the day. Next our honourable chief guest released the hand written magazine “Viveka Manjari”. The students of IX standard sang a beautiful song related to this function. 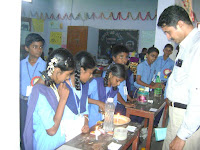 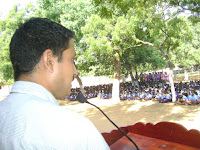 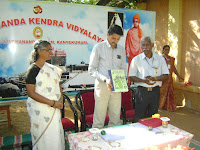 Next Mann. Radha Didi presided over the function. She spoke about the National Seminar conducted in our campus. She appreciated the wonderful creations and inventions made by our students in the Science and Arts Exhibition. She praised the centum achievement of X and XII handled teachers and also about the award given to our teachers by the honourable district collector. She talked about the 150th birth Anniversary of Sister Nivedita. She reminded us that our country should be advised the students to use their potential and they should spread the fragrance of India to the rest of the world. 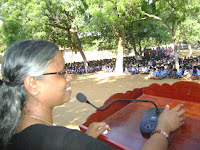 Mann.Radha didi, Dakshin Prant Sanghatak, presented a memento to the honourable Chief Guest. Neelananth of IX standard proposed the vote of thanks. The programme was concluded with our Kendra Prayer.

The welcome and adoration that was given to the speeches of Swami Vivekananda during the parliament of Religions at Chicago made it clear that world is in need of the message of Bharat. Swami Vivekananda addressed the audience as ‘Sisters and Brothers of America’.  It had an electrifying effect on them.  It was not merely a form of address but behind those words were the great spiritual strength of India.  Therefore Man. Eknathji wanted this day to be celebrated as Universal Brotherhood Day.

The master of Ceremony was presented by our teacher Smt.Jeya.  In our school 47th Anniversary of the dedication of the Vivekananda Rock Memorial and Universal Brotherhood day celebrations were celebrated in a grand manner.  The programme started at 5.30 P.M.  On that happiest occasion, we initiated our programme by an invocation song sung by VIII and IX standard girls.
The welcome address was presented by our beloved Principal, Shri.S.Abraham Lingom.  The function was presided over by Mann.Parameswaranji President of Vivekananda Kendra and Mann.Bhanudasji, General Secretary of Vivekananda Kendra.
The students of VIII and IX standard sang a song related to the Universal Brotherhood day.

Mann.Bhanudasji, General Secretary of Vivekananda Kendra addressed the gathering.  He talked about the importance of Universal Brotherhood day.  He quoted the words of Swami Vivekananda, “Each Soul is potentially divine”.  The motto of our school is “Man making and nation building”.  He expressed about the spirituality among the people of India for the development of the strong nation.  He advised the audience to read the life of Swami Vivekananda and Sister Nivedita

The Chief Guest Shri.John R D Santhosham, B.A.,B.L District Judge Mahila Court addressed the gathering.  He spoke about the meditation hall built in Rock Memorial.  It is one of the shrines of national identity and the symbol of unity for the world.  He exhibited Swamiji as a role model or inspiring person to the youth of our nation.  He instructed the audience not to be selfish from the childhood onwards.  The students should develop all the good habits.  On this special day he reminded us about the Guru Sri Rama Krishna Paramahamsa who was the great teacher of Swamiji.  He advised the students about the benefits and disadvantages of the technology.
The Kendra employees who have completed their 10,20 and 30 years of service were honoured. Our Vice Principal Smt.Sariga readout the names.  Mann.Parameshwaranji presented the memento to honour the Kendra employees.
We had an eminent person Dr.N.Neela Mohan, M.A.,M.Phil, Ph.D, Principal of Vivekananda College, Agasteeswaram.  He addressed the audience.  He expressed his views about that day which showed the Universal Brotherhood to the entire country.  He talked  about Swamiji’s Guru Sri Rama Krishna Paramahamsa whose spiritual power was accepted by the world.  He reminded us about the birth anniversary of Bharathiyar who spread the thought of freedom through his poem.  He illustrated some stories about how to lead our life in a proper way.
On account of Universal brotherhood day some sports were conducted for Kendra employees.  They participated in the competitions and won the prizes.  The chief guest and the special guest gave away the prizes to the winners.
The special guest Thavathiru. Swami Padmendra, President of Vallalar Peravai, Nagercoil addressed the audience.  He spoke about the important qualities of Swamiji.  He talked about the good atmosphere of our school and then about the discipline found in our school.  He illustrated the Kural of Thiruvalluvar.  He advised the students that India should be changed into the developed country.  All should leave the habit of selfishness and they should involve themselves in helping others.  He instructed the students to join with the good people and insisted them to get good marks and respect the teachers. 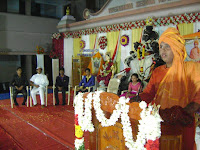 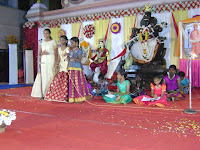 The vote of thanks was proposed by our beloved Vice Principal, Smt.K.G.Sariga.  Various cultural programmes were performed by our V.K.V. students.
Finally the programme was concluded by Kendra prayer 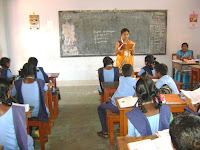 In India,5th September is celebrated as Teachers’ Day as a mark of tribute to the contribution made by teachers to the society.5th September is the birth anniversary of a great teacher Dr.Sarvepalli Radhakrishnan, who was a well-known diplomat,scholar, the president of India and above all, a teacher. 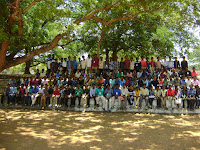 Onam is the biggest and the most important festival.It is the harvest festival and is celebrated with joy and enthusiasm. According to a  popular legend, the festival is celebrated to welcome king Mahabali, whose spirit is said to visit Kerala at the time of Onam. 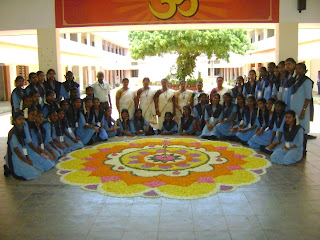 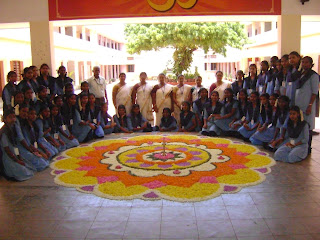 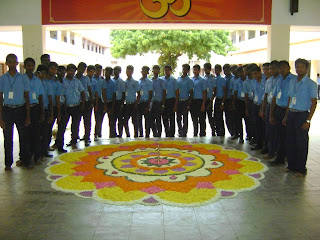 Onam celebration was celebrated with colourful Rangoli and it was decorated with varities of flowers called as ‘Athappu’. The students of XI Standard decorated with multi-coloured flowers on Rangoli.
at 10:50 No comments:

Vinayaga Chathurthi is the most favourite festival of the Hindu religion. It is celebrated all over the country with full devotion and joy. It is celebrated as a birth anniversary of the Lord Ganesha. Ganesha is a  son of Parvathi and God Shiva. He is the most favourite God of everyone especially children. He is the God of wisdom, prosperity and good fortune. He is the remover of abstacles and all the problems as well as creator of happiness in the life of people. People in India worship Ganesha always before starting any work. 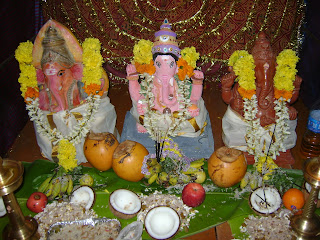 People celebrate Ganesh Chathurthi every year in the month of August or September for ten days. Pooja starts from Chathurthi and ends on Anant Chaturdashi.
Vinayaga  was celebrated in our school in a grand manner. XI boys made a clay statue of the Ganesha and kept in our school on Chathurthi and did worship for eight days 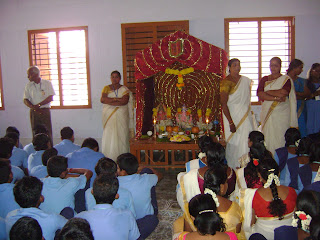 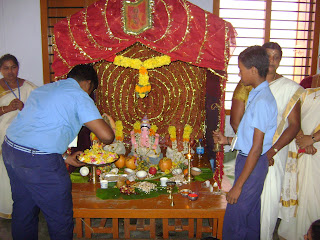 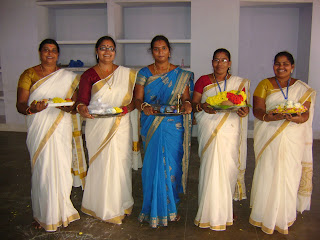 The final day celebration was by X and XII class teachers and students. Some students chanted  Ganesha songs and it was followed by others. At last a student offered flowers to Ganesha with mantaras. The students prepared everything for the pooja. 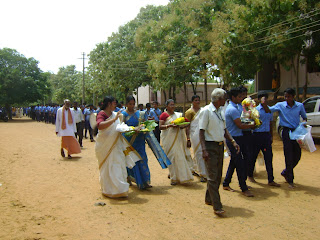 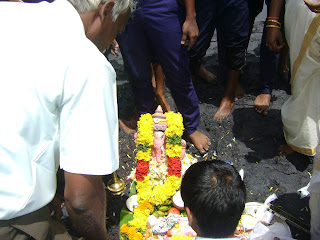 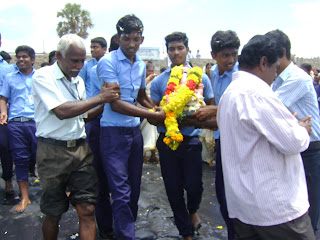 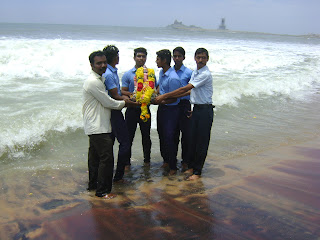