66th REPUBLIC DAY CELEBRATION            REPORT-2015
Date: 26-01-2015
Venue: Vivekananda Kendra Vidyalaya Matric.Hr.Sec.School
All the people through out India celebrate the nation’s Republic day on January 26th every year. It is a day to remember when India’s constitution came into force on January 26 ,1950, completing the country’s transition towards becoming an independent republic. This date was chosen as it was the anniversary of ‘Purna Swaraj’ day, which was held on Jan 26, 1930. Dr. Rajendra Prasad took oath as India’s first president, at the Durbar hall in the government house followed by a residential drive along a route to the Irwin stadium where he unfurled India’s national flag. 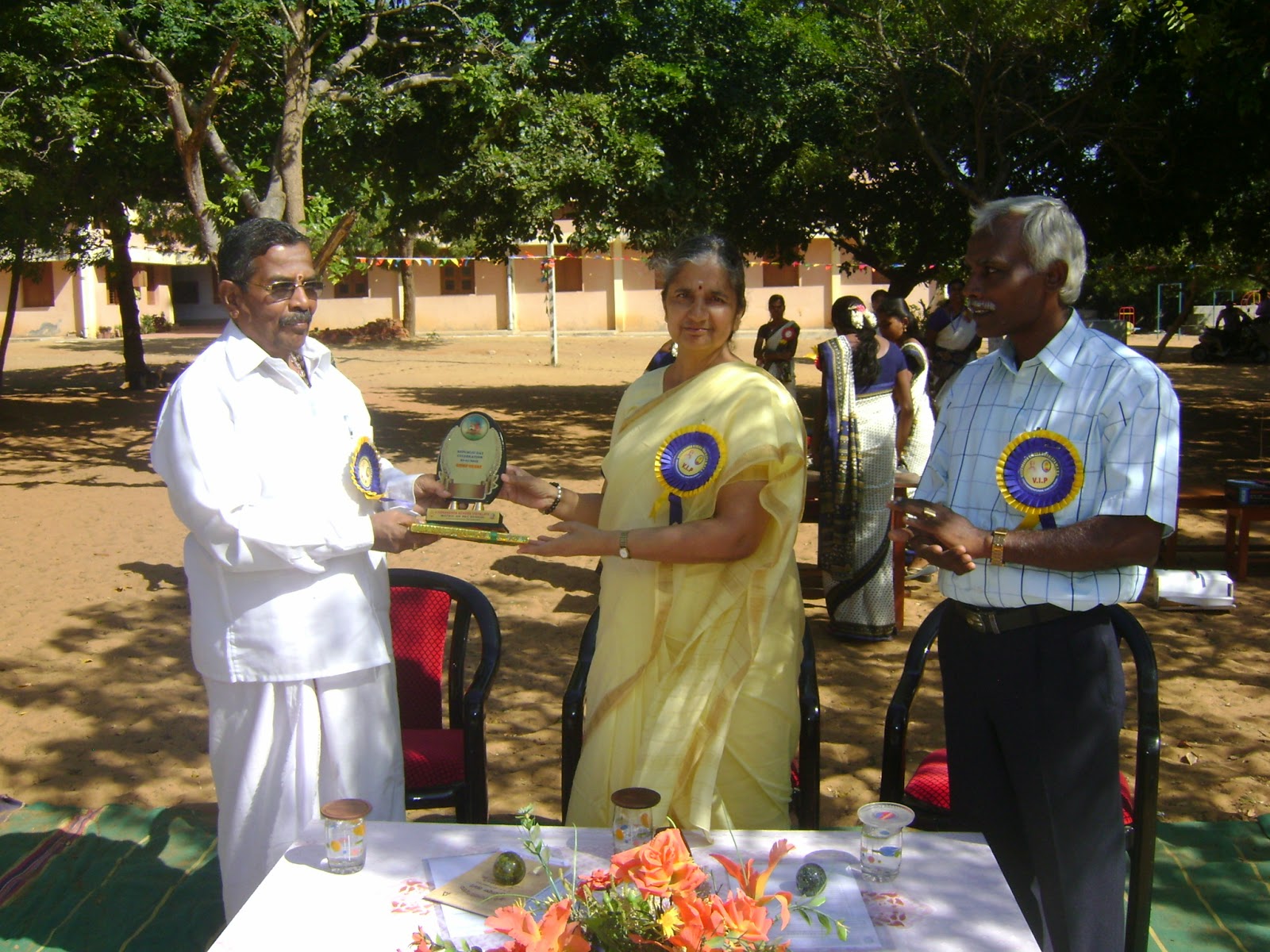 In our school 66th Republic Day was celebrated in a grand manner. The programme started at 8.30 A.M. on that happiest occasion we initiated our programme by Vandhe Madharam sung by VIII standard girls. 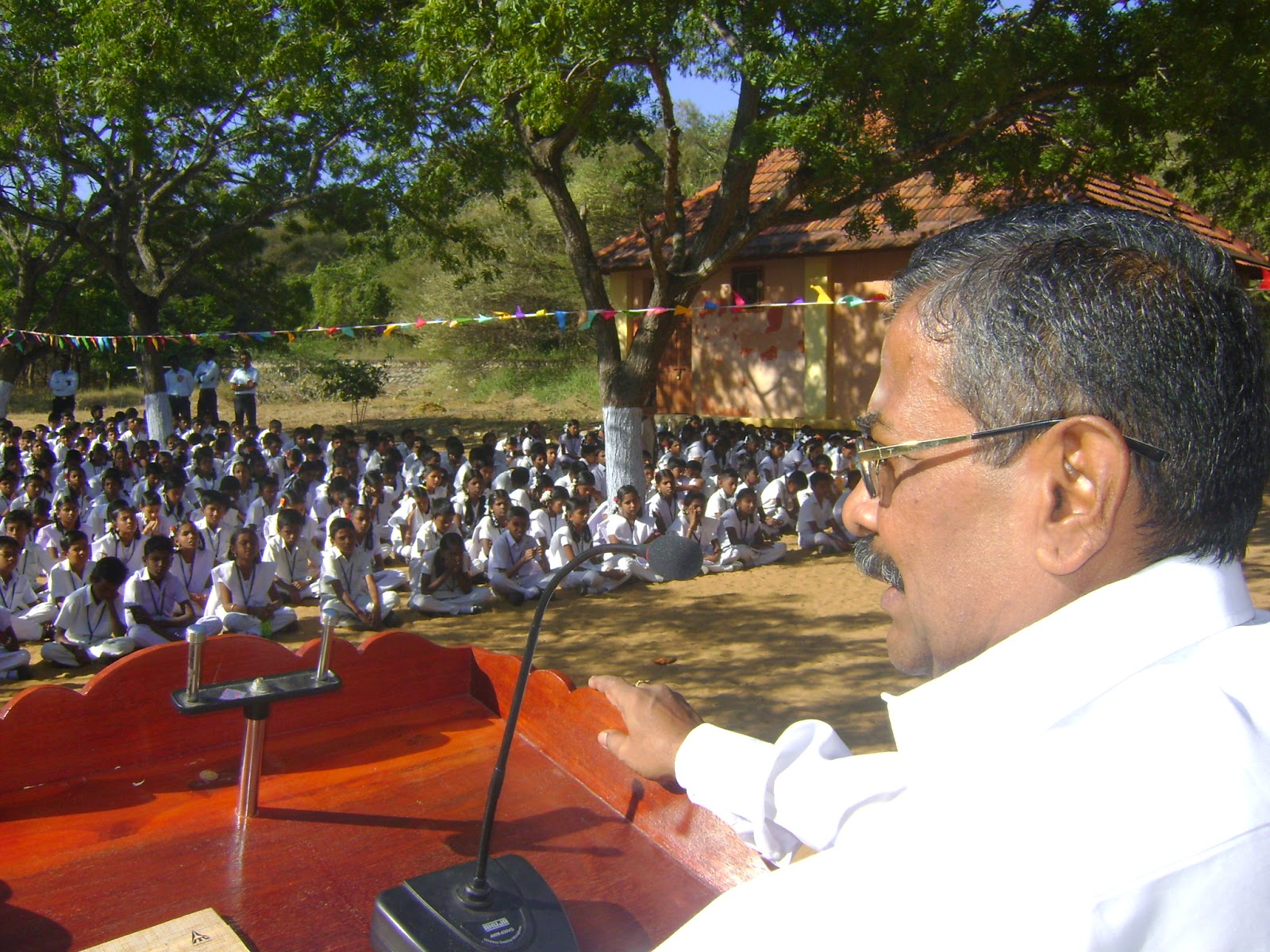 We paid our salutation to our Mother Bharath by unfolding our tri colour flag. The flag was hoisted by our honourable Special Guest Mananeeya Nivedita Didi, Vice president of Vivekananda Kendra followed by the National Anthem. The pledge was taken by all the participants. The welcome address was presented by our teacher kum. Menaga Devi.
The students of VIII and IX standard expressed their patriotic feelings in the form of a song in our National Language. M.S.Abinaya of XI standard delivered the speech in English about the importance of the day.
Next the boys of VII and VIII standard sang a Tamil song of Mahakavi Bharathiyar. The students of V,VI,VII and VIII standard performed a marvellous karathe and showed the value of united effort.
The students of IX standard enacted Tamil drama and exhibited their patriotic spirit.
We had an eminent person Dr.Kumaraswami, Retd.H.M.,D.V.D.School, Kottar as our           Chief Guest who addressed the gathering. He expressed his views about the importance of the day. He mentioned some of the quotes from Tamil poet laureates. He talked about our ancient Indian culture and pointed out a suitable example from the great epic name ‘Ramayana’. He insisted his ideas about the Former president Abraham Lincoln’s quotes “by the people, for the people and of the people”.    He advised the students to protect this country and to sacrifice their lives for the benefit of our country. He reminded about Swamiji’s thought and said that good people always love the mother land and he sang a beautiful song based on our mother land. 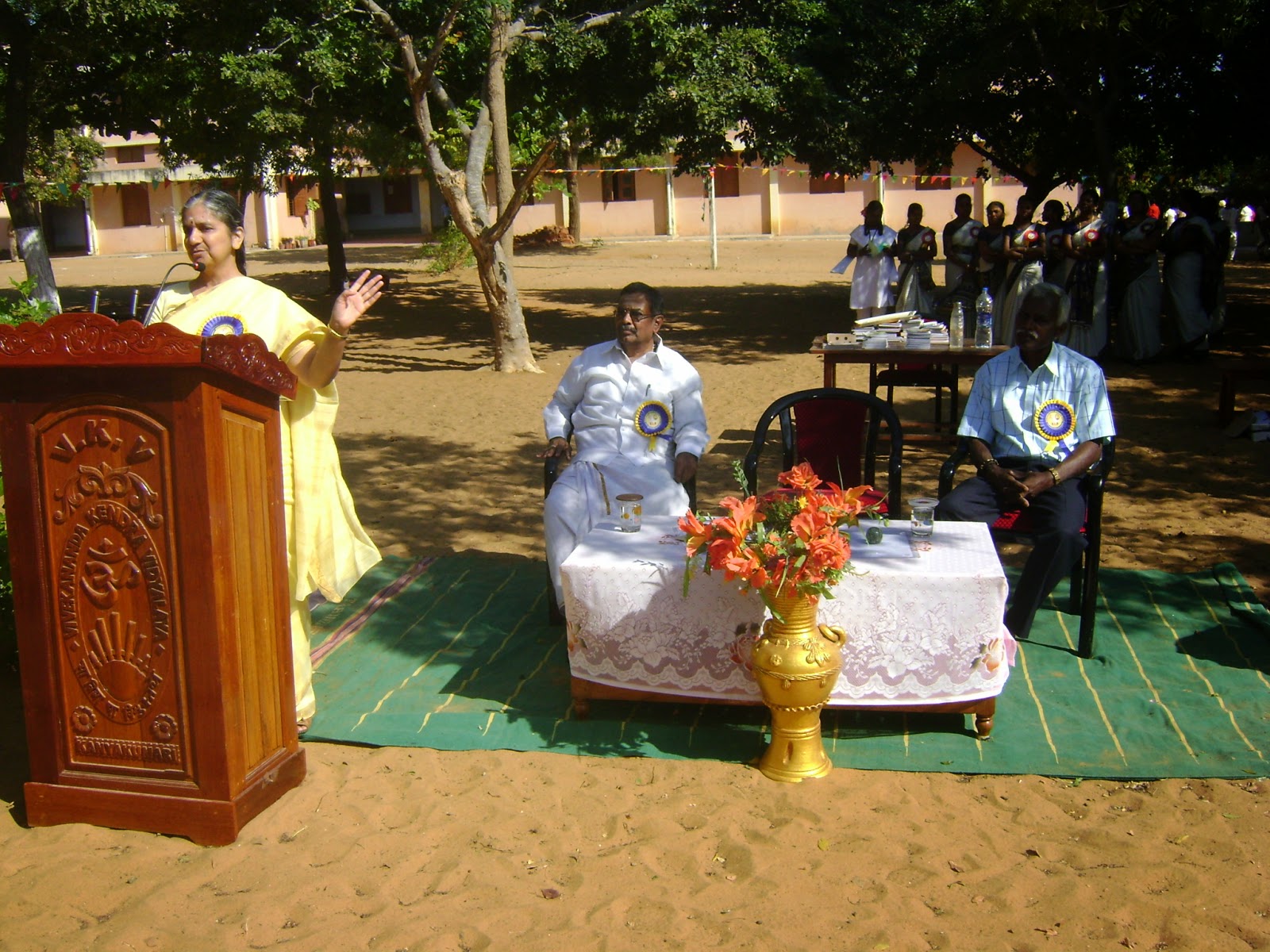 Our Special Guest Mananeeya Nivedita Didi, Vice President of Vivekananda Kendra addressed the gathering. She expressed her views about the importance of the day. She said that she was proud to belong to the nation that had self confidence and hard working. She talked about our nation’s culture and tradition. She told about the announcement of the International Yoga Day. She advised the students to read books and to acquire knowledge from the library.
Teacher Smt. Nallamal read out the prize list and the prizes were given away by our honourable Chief Guest and Special Guest. Our Special Guest presented a memento to the honourable Chief Guest. Vote of thanks was proposed by our teacher Smt. Vimala Devi. The programme was concluded by Kendra Prayer.
at 14:47 No comments:

Swami Vivekananda was known as Vireshwar or Narendranath Datta. Narendranath was born in Calcutta on 12th January 1863 on makara sankranti day. His father Vishwanath Datta was a leading advocate. His mother Bhuvaneswari was a very pious lady, who was a devout worshipper of lord shiva. One day she had an auspicious dream. She dreamt the lord shiva would be born as her child. Later, when the child was born, the mother fondly named him as Vireshwar. Swami Vivekananda, whose life and teachings form a golden chapter in the history of our mother land. Infact, he gave a new life to India. 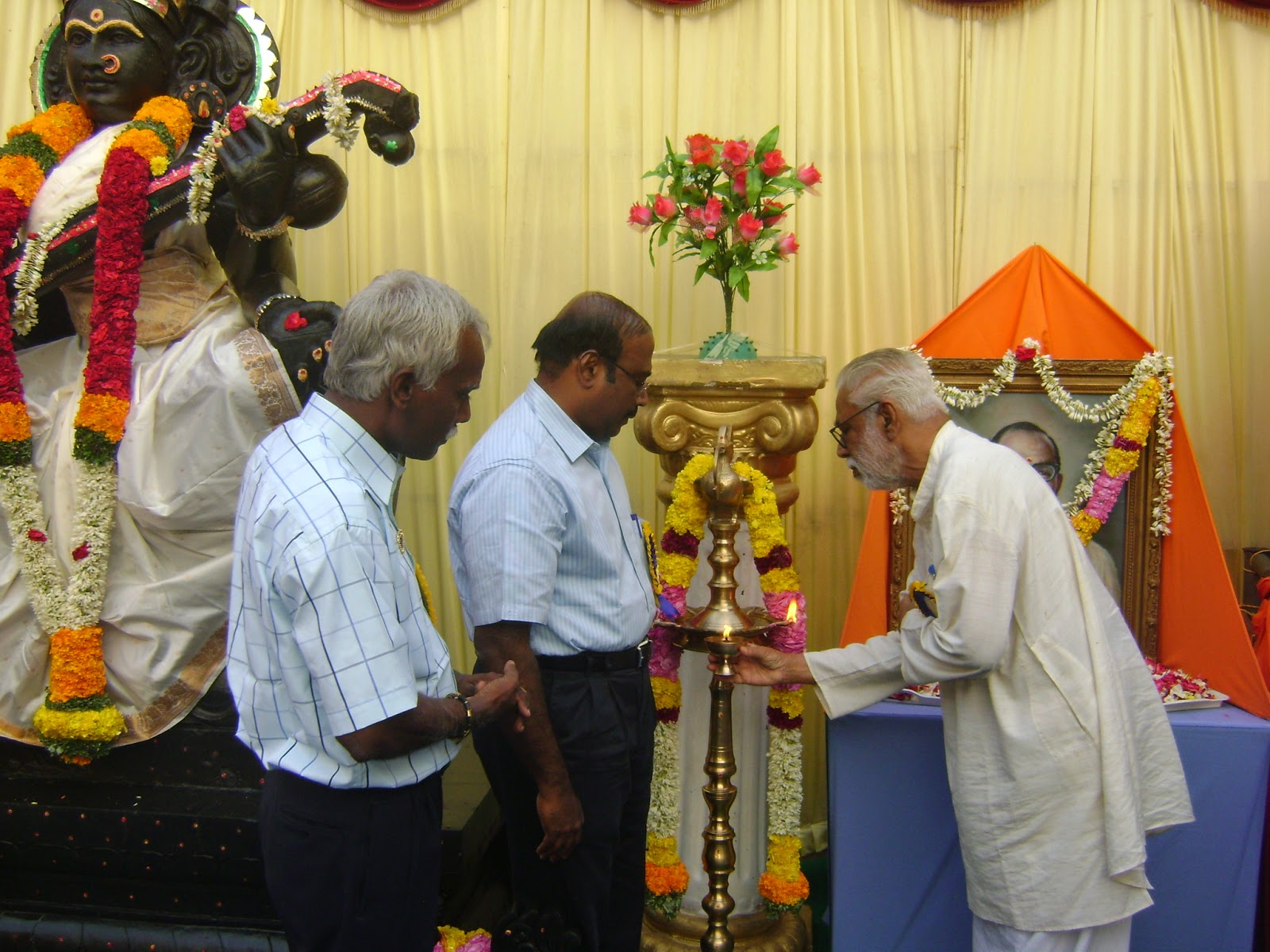 In our school, the 152nd Janma Diwas of Swami Vivekananda was celebrated in a grand manner. The programme began sharply at 5.30 pm. headed by resource people Man.Balakrishnanji, Vice president of Vivekananda Kendra and Dr.M.Radha krishnan, Superintendent of Govt.Medical College,Asaripallam. 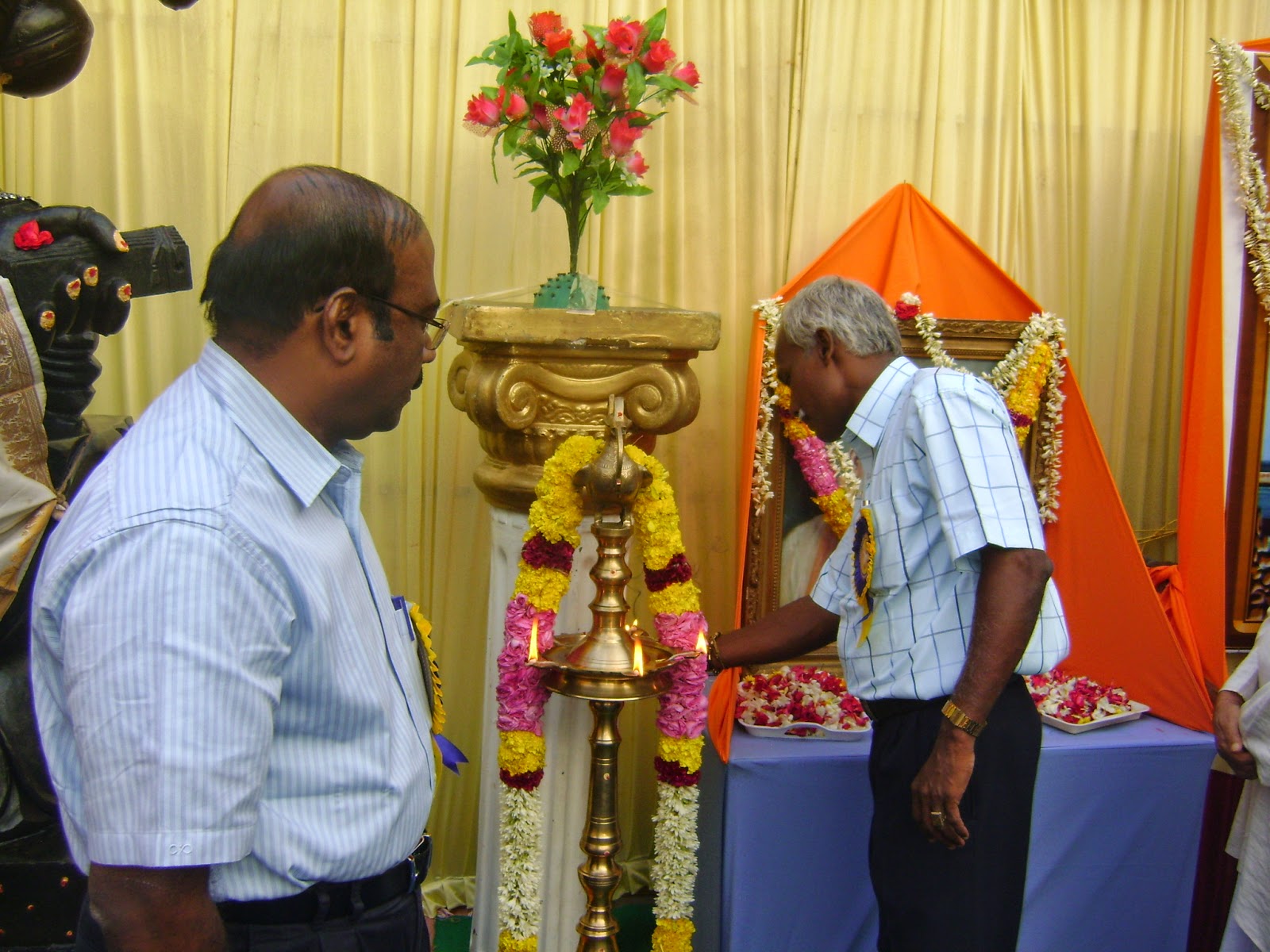 The programme was inaugurated by Dr.M.Radha krishnan by lighting the lamp followed by the other members on the dias. Invocation was sung by the girls of IX standard.

The welcome address and school Annual report were presented by our  Principal Shri. S.Abraham Lingom.

The glory of Eknathji was presented in the form of a song by the girls of VIII standard. We had an eminent person Dr. M.Radha krishnan Superintendent of Govt.Medical College,Asaripallam as our Chief Guest who addressed the gathering. He talked that he had seen in this institution in making the children to be well developed in discipline, morality, culture and way of respect to the elders. Students are guided not only to develop their knowledge but also to develop their future education. He also pointed out the necessity of a good communication skill. He expressed his views that the students could attain success only by the full support of their parents and the teachers. Teaching is one of the noblest professions. He insisted that knowledge and games alone are not important but students should give importance to writing,reading,repeating,rewriting and reproducing. He quoted        “Hard work bring success” and told that every thing is possible  by hard work . He addressed that our school is the spiritual service organization.

The talents of our children are brought out through various competitions.Our children participated in the competitions enthusiastically and won the prizes. Our Vice Principal Smt.Sariga read out the names. Our honourable Chief Guest gave away the prizes to the winners.

The function was presided over by our Special Guest Man.A.BalaKrishnanji, Vice president of Vivekananda Kendra who also addressed the audience. He expressed his views about Swamiji’s Chicago address which was a turning point for the Indian people. He said that he was proud to belong to the nation that had self confidence, courage, self respect and positive thinking. He advised the students to follow Swamiji’s thoughts and qualities and implement in their life.

Our Special Guest presented a memento to the honourable Chief Guest. Vote of thanks was proposed by Shri. Krishnaswami, Administrative Officer of Vivekananda Kendra. After that all the audience were entertained by the cultural programmes of the school students. 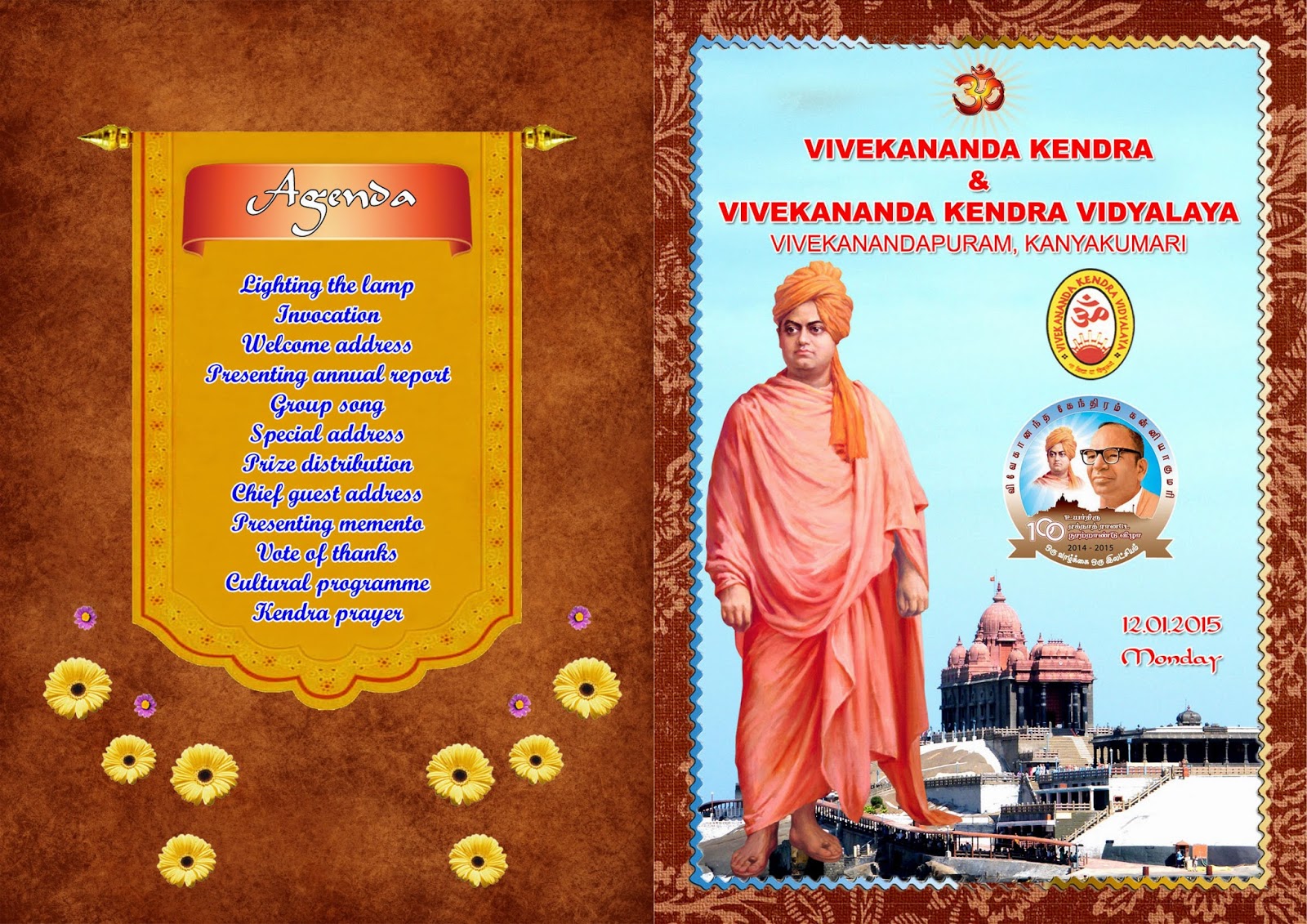 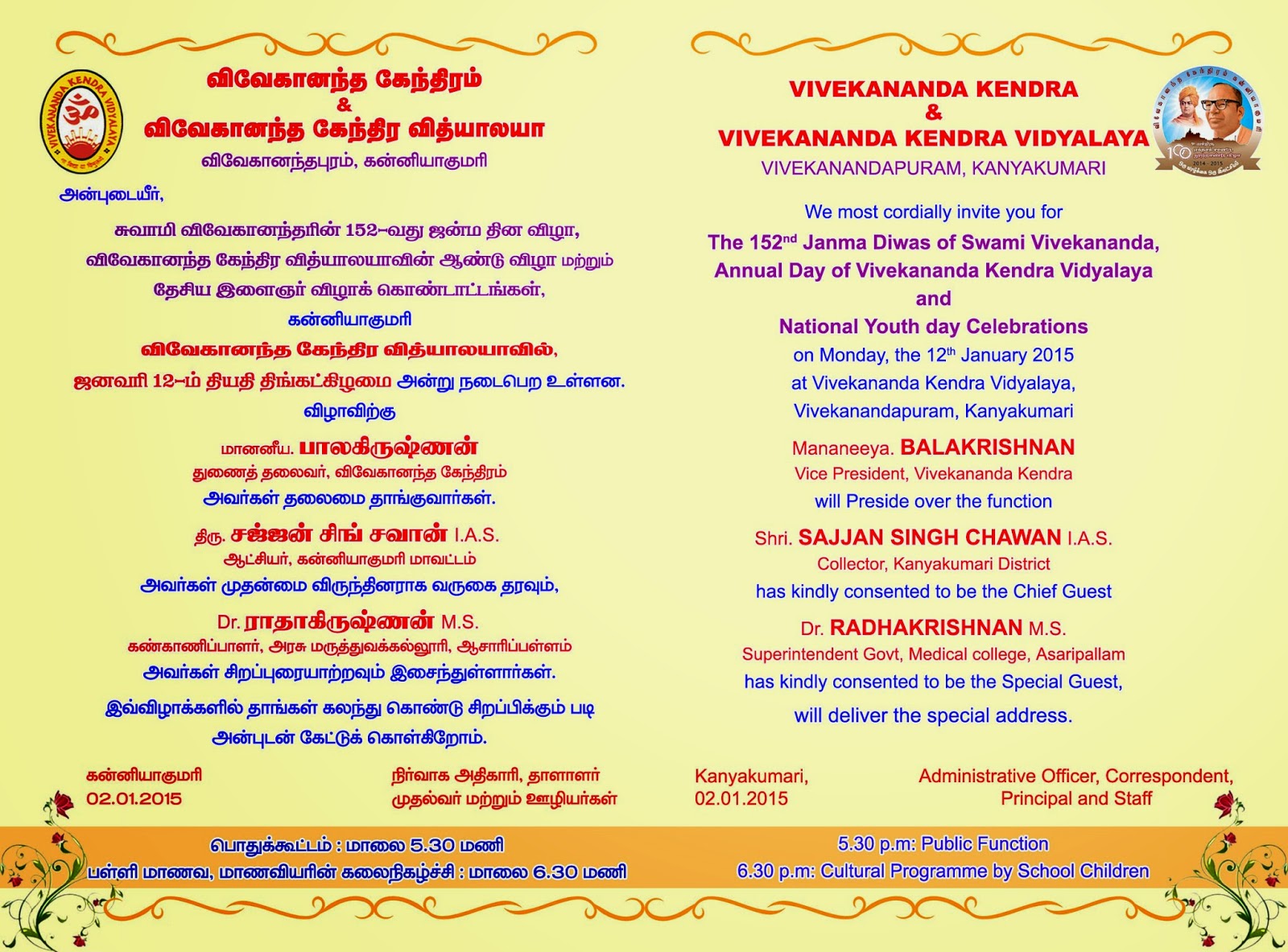