Guru Poornima programme was started at 2.45 pm.  It was compered by A.K.Joshua Mathew of IX standard.
Number of students received the scholarship – 100
The programme was initiated with the invocation song sung by the students of IX Standard girls.Welcome address was delivered by N.P.Eshana of VIII Standard. Rahul Prathaban of VIII standard presented his speech about “Guru Poornima” in Tamil.
Guru song was sung by the students of VIII Standard girls. 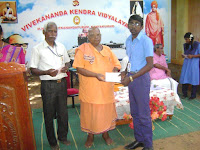 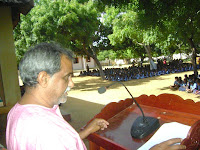 Mann. Hanumanta Raoji, Treasurer of VRM & VK addressed the audience.  He explained about the importance of Guru Poornima.  He advised that the students should develop their leadership quality besides knowledge.  He reminded Swami Vivekananda’s vision about India in future.  He specified the teachers’ and the students’ responsibilities in the society. 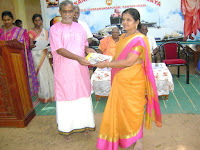 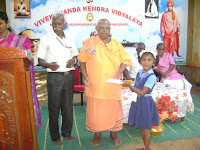 The importance of the day in English was presented by K.M.Neelananth of XI Standard.Kum. Ramya kumari, the teacher of VKV readout the Mean-cum Merit scholarship and it was awarded by our Chief Guest. The teachers who produced centum result in X and XII standard in the previous academic year were honoured by our special guest. 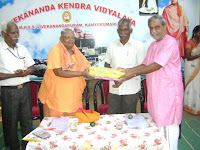 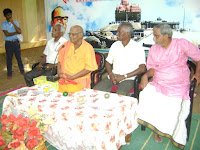 The chief guest Srimath Swami Ramakrishnananthaji addressed the gathering. He quoted Swamiji’s thought, “Education is the manifestation of the perfection already in man”.  He illustrated that, from the life of guru the students will acquire the knowledge.  He also listed the guru parambara’s names. He explained that guru is a person who removes the darkness of ignorance.  He instructed the students to respect their gurus. Vote of thanks was proposed by Sherin C.S.Dino of 9th standard. The programme was concluded by Kendra Prarthana.