Universal Brotherhood day celebrated each year on 11th September remarks the importance of brotherhoodness and the efforts laid by the great saint Swami Vivekananda to raise the name and fame of our country.  Swamiji’s address on Chicago was wholly concentrated on bringing out the nations spiritual and moral values to the world that seemed our nation as nothing until that.  Swami Vivekananda’s speech echoed the whole world about our nation India as a land that has a great origin, great moral and spiritual values and a nation truly devoted and ruled by Gods. 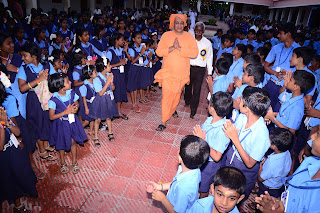 As per that, Universal Brotherhood day was celebrated in our school on 11th September 2015.  The program started in the evening of September 11th.  The dignitaries on the dias lighted the lamp that made a delightful starting. 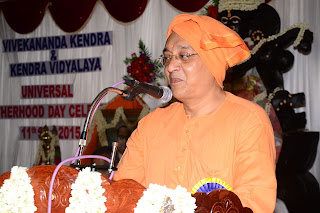 Invocation song was sung to invoke Gods to shower Their blessings, by the students with combination of music that pleased, the listeners.
Welcoming is a passion to fill the hearts of visitors.  Welcoming brings joy.  According to that a spontaneous and fruitful welcome address was delivered by our Vice Principal Smt. K.G.Sariga. 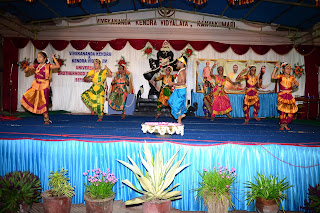 Followed by the welcome address a long and thought oriented Presidential address was delivered by our treasurer Mann. Hanumantharaoji.  He mentioned the endless and tireless efforts laid by Swamiji and Eknathji by which they are known as great personalities.  He explained each and every line spoken by Swamiji in Chicago address.  He mentioned Rock Memorial had become an embodiment by the hard labour of Eknathji and thus Eknathji also become an embodiment to the whole world. 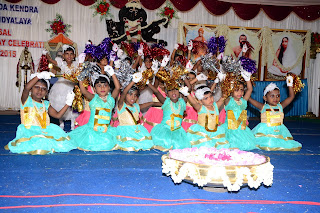 A beautiful song was sung by the girls of VKV that was so melodious.
Vivekananda Kendra staff were honoured by the Special Guest by presenting memento and prizes for their successful completion of ten years and truthfulness shown through their behaviours.
Chief Address was delivered by honourable Chief Guest Sathyabodhananda Maharaj.  His speech was full of interaction with students.  He started his speech with chanting the Ohm Mantra.  He also chanted the Saraswathi Sloka.
He spoke about the Chicago address made by Swami Vivekananda.  He highlighted the beginning lines that Swamiji spoke - “Sisters and brothers of America” which got a standing ovation for 2 minutes among the crowd of 7 thousands.  Chief Guest’s elongated speech turned again to an interaction by pointing to the five photos placed on the dias.  He first pointed to the statue of Saraswathi placed on the middle of stage mentioning it as Vidya, the God of Education.  He also briefly explained the four hands holding Veena and playing it holding books to tell the need of education, beeds on one hand to show the need for (bakthi) devotion to God.
He then turned to Saradha Devi and Ramakrishna telling that their life is a whole devotion to the world.  Their teachings make people understand that all are brothers and sisters of same parents.
Swami Vivekananda was the next one whom he mentioned as the final product to world as God.  He also mentioned even Gandhiji followed the ideas of Swamiji.
He finally pointed to Eknathji without whom the great embodiment that is the Rock Memorial could not be seen today.  He finally concluded his speech by saying that we are of the great Vasudeva Kundumbakam.
After the speech, memento was handed over to the Chief Guest by our honourable treasurer Hanumantharaoji to make that function a memorable one.
Vote of thanks was delivered by Sri.Krishna Swamiji who thanked each and everyone for the kind co-operation throughout the program.
Followed by the vote of thanks there were various cultural programs wonderfully performed by our VKV students.  The cultural programs were a feast to the eyes and ears which included dances, song, drama and variety entertainment.
The program ended successfully with Kendra Prayer. 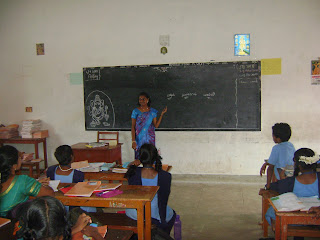 The program started with a warm welcome address delivered by N.Rishika Bharathi of 8th Standard.  Welcome address pleased the listeners with a smile to be present for such a wonderful celebration. 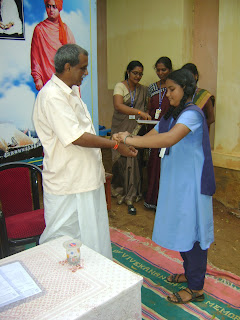 Swetha of 9th standard delivered a wonderful speech in a stream of flow in Tamil language about importance of the day.  She explained clearly about the need to celebrate the three functions and their importance in everyone’s life.
“Music is well said to be the speech of angels, child of prayer, companion of religion”.  Students of 7th and 8th standard sang a beautiful song to bring peace and bliss of God for the function. 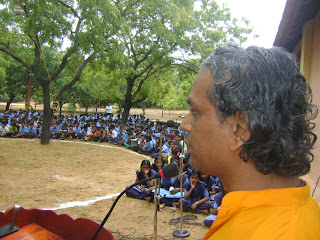 Chief Guest Swami Prasanna Amritha delivered a meaningful speech on the importance of the day.  He mentioned that other countries salute India for its religious powers.  He highlighted India as the birth place of Krishna.  He mentioned that Bhagavath Gita brings out lot of messages.  It taught men to do duty without expectations.  He also mentioned that Swami Vivekananda’s life itself is a message for human being.
Athulya of 7th Standard was called upon to tie Rakhi to a brother of 12th Standard and the dignitaries on the dias.
Student Principal and student teachers who enacted that day came forward to tell their experience.  They mentioned briefly about the difficulties undergone by teachers and the job that has the reverence forever.  They mentioned teaching as the noblest profession.
Our Special Guest Hanumantharaoji presented a memento to the Chief Guest who made the function an unforgettable one. 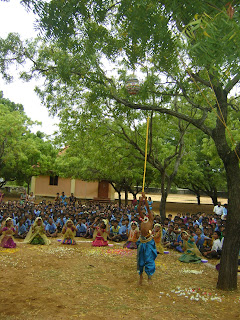 Followed by that was a mind blowing dance where Krishna and Gopikas danced gracefully.  The dance seemed to the viewers as Krishna and Gopikas originally dancing in Brindhavanam.
Krishna then entertained all of us by Uriyadi.  It was awesome to watch Krishna trying hard to break the pot running so beautifully among the Gopikas who were waiting for prasadham.
Program reached its final turn to vote of thanks.  Hema Shalini of 7th Standard presented  the vote of thanks.
Achieved the destiny with grace of God.  We all made our reverence to Him by singing the prayer song.  The program thereby concluded with Kendra Prarthana. 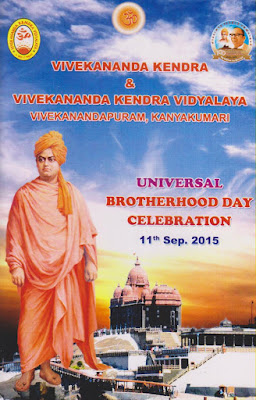 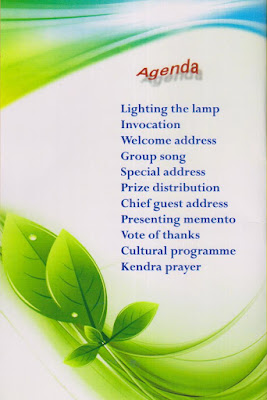 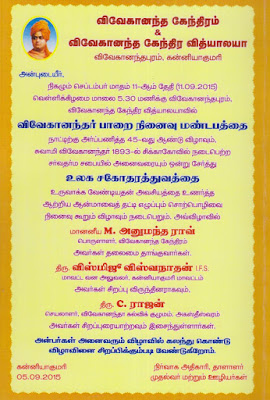 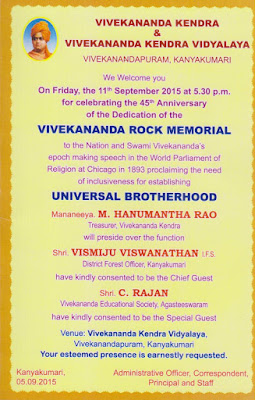