“Patriotism is a secret resource of a Successful society” 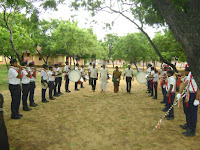 The 15th August is a very important day in the history of our country.  It was on this day in 1947 that India became Independent.  We won freedom after a hard struggle of national leaders and freedom fighters.  The Independence Day reminds us of those patriots who struggled and sacrificed their lives for our country. 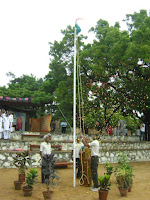 Vivekananda Kendra Vidyalaya celebrated 72nd Independence Day with great patriotic spirit on 15th August 2018.  The celebration started at 8.30 A.M.  The programme was compered by S.R.Abbiramy of 11th Standard.  On the happiest occasion, we initiated our celebration with an invocation “Vandhe Matharam” sung by VIII standard students. 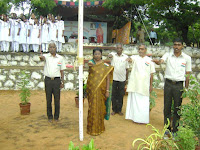 “Salutation to our national flag is our responsibility as a good citizen”.  Our National Flag was hoisted by the Chief Guest of the function Smt.Anushiya Selvi, Former Joint Director of Employment and Training, Chennai. The gathering paid their salutations to our National Flag.  National Anthem was sung by all the participants of the function.  The pledge was lead by the student A.Labin of IX standard. 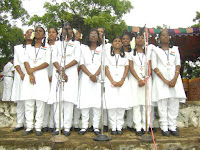 “Hospitality makes our guests feel at home”.  Kum. Kalaivani, the teacher of Vivekananda Kendra Vidyalaya extended awarm welcome to the dignitaries, teachers, parents, students and all the viewers. “Unity is Strength”, when there is a team work, wonderful things can be achieved.  The students of Vivekananda Kendra Vidyalaya performed mass drill and showed their team spirit.  “Music makes us feelpleasant”.  The students of VIII and IX standard sang a song of brave Queen Jancy Rani Laxmibai in our national language.  “The right speech is always effective”.  Aashika of IX standard shared the significance of Independence Day. 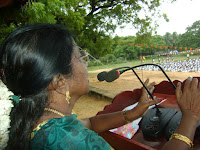 “Speech is power, speech is to persuade, speech has an incredible power”.  We had an eminent personality Smt.P.Anushiya Selvi, former Joint Director of Employment and Training, Chennai as the Chief Guest of the function addressed the gathering.  She remembered the Father of our Nation, Mahathma Gandhiji and all the freedom fighters who sacrificed their lives for getting independent from the Britishers.  She saluted the sacrifices of our Country’s military forces.  She proudly said that India proved the concept of unity in diversity.  She focused on the existence of unity even after lots of differences of cultural, social, physical, linguistic, religious and political etc.  but people live together with harmony and had the feeling of oneness. 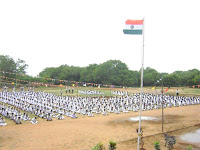 She advised the students that they should have the quality of unity.  She hopefully said that education brings the character of unity.  She explained that one of the greatest speeches of Pandit Jawaharlal Nehru’s “Tryst with destiny”.  She illustrated the democracy quote of Former American President Abraham Lincoln.  She said that democracy provided us protection, Fundamental rights and Freedom of speech and the students should utilize it in a proper way.  She expressed that the villages are the backbone of our country and development of our country depends on the growth of the villages. 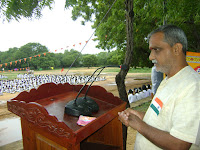 She expressed the courageousness of the women freedom fighters Jancy Rani Laxmibai in north and Velu Nachiyar in south.  She insisted that the students should be ready to fight for justice and should follow the idealogy of the leaders on the basis of spiritualism.  She said that non-violence was the tool of our independence.  She conveyed the message that the students should follow the path of non-violence. 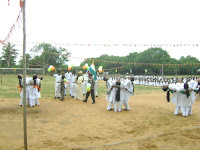 “The tree of liberty must be refreshed from time to time with blood of patriotism”. Mathisha of VIII standard delivered the importance of the day in Hindi.  Our Mann. Hanumantaraoji, Treasurer of Vivekananda Rock Memorial and Vivekananda Kendra as the President of our function addressed his presidential speech.  He remembered the economical, Agricultural, educational, cultural and spiritual level of our country before independence.  He exhibited proudly that the level of our present India is almost in the top and all countries appreciated the growth of India. 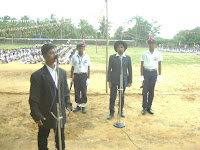 He remembered that Sri.Aurobindo, the great Indian philosopher and nationalist was born on 15th August 1872.  He insisted that the entire power and aspiration of every individual put together would help our Country’s growth.  He illustrated the life of Margaret Noble known as Sister Nivedita who was inspired by Swamiji’s ideology and worked for our Indian people and India.  He quoted that the character of individual defines the quality of a nation.  He explained the problems infront of our country like dishonesty, terrorism, corruption and other social evils. 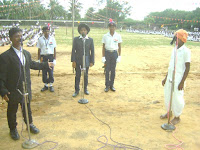 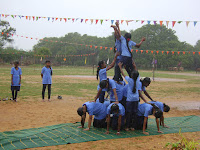 “Physical fitness is key to a healthy body.  It is the basis of dynamic activity”.  The brave girls of Vivekananda Kendra Vidyalaya showed their unity through pyramid.  “Talent wins games, but intelligence and perseverance win championship”. 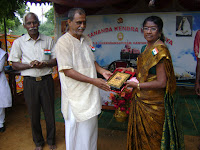 The prizes were given to the merit students by our honourable chief guest.  The president of the function Mann. Hanumantaraoji presented the memento to the chief guest Smt. P.Anushiya Selvi. 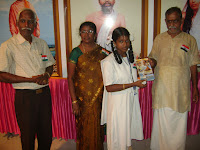 “Gratitude makes sense of our past, brings peace for today and creates a vision for future”.  Vote of thanks was proposed by Smt. E.Sumathi, teacher of Vivekananda Kendra Vidyalaya.

The programme ended at 10 AM with Kendra Prayer.