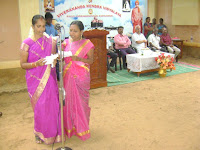 Aswini of XI standard delivered her speech about the importance of Gokulashtami and Rakshabandhan in Tamil. Smt. P.Jeya, teacher of Vivekananda Kendra Vidyalaya spoke about Samskaravarga and teachers of Samskaravarga sang a beautiful song. 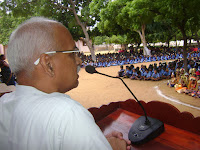 Mann. Bhanudasji, General Secretary of VRM & VK as the president of our function addressed his presidential speech. He explained the painful life of Vasudeva and also the birth of Krishna that made a halt to evil things. He advised the students to get the blessing from the elders. He spoke about the importance of The Bhagavat Gita. He instructed the children to maintain our culture. He compared Krishna’s life with Swamiji. He said whom so ever bring happiness, they resembleKrishna. He exhibited how prayer makes one physically and mentally strong. 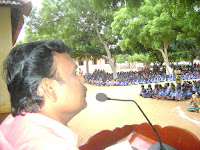 The students of VIII and IX sang a song in Tamil. We had an eminent personality Sri.G.Kishore, Headmaster, Govt.Hr.Sec.School, Kumarapuramthoppur as the Chief Guest of the function who addressed the gathering. He explained the three parts of Bhagavat Gita. He illustrated how Albert Einstein, Maxmiller were familiar with The Bhagavat Gita and how modern scientific invention is based on Vedas. He narrated the story of Lord Krishna and then the importance of Rakshabandhan. He advised the students to learn The Bhagavat Gita which will take them to the highest level. 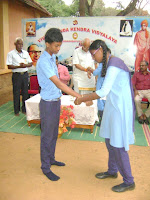 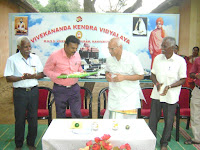 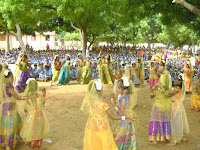 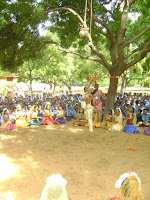 Vote of thanks was proposed by Sri Ram Chant of VIII standard. The programme was concluded by Kendra Prarthana.

Independence day celebration was started at 8.30 a.m. It was compered by T.Monisha of XI standard.

The programme was initiated with “VandheMatharam” sung by Ix standard girls.

Our National flag was hoisted by the Chief Guest Sri.Ponneelan, M.A., M.Ed.,Joint Director, School Educational Department(Rtd.).National anthem was sung by all the participants of the function.The pledge was lead by the student Afsal of VIII standard.

We had an eminent personality Sri.Ponneelan, M.A.,M.Ed., as the Chief Guest of the function who addressed the gathering. He advised the students to become doctors and engineers and more than that they should be a great human being. He illustrated Swamiji’s life. Swamiji dreamt about new India. He exhibited that we should consider the life of leaders like Gandhiji and AyyaVaigundar. He advised that the students shouldutilise the opportunity and make their life flourish.K.Dharshini of VIII standard delivered the importance of the day in Hindi.

Mann.Hanumantaraoji,Treasurer of VRM & VK as the president of our function addressed the audience. He said that the students should realise their duty, responsibility, Character and vision of Swamiji. He quoted that the future of India is in the hands of young generation. The students should develop their character and pass the message of our culture, spirituality and peace. He also mentioned the spiritual gurus of Sri Ramakrishna, Saratha Devi and Swamiji.

The students of VI,VIII& IX standard enacted Tamil drama and exhibited their patriotic spirit through a play “Azhagu Muthu Khon”.

Kum.S.Ajitha, teacher of Vivekananda Kendra Vidyalay read out the prize list and the prizes were given away by our honourable chief guest and special guest.

Mann. Hanumantaraoji, presented a memento to our honourable chief guest.
Vote of thanks was proposed by our teacher Smt.M.Nallammal.
The programme was concluded by Kendra Prarthana.