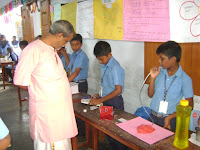 Eknath Ramakrishna Ranade popularly referred to as Eknathji, was a social activist and leader, motivated by the twin spirits of nationalism and spiritualism and known for the great organizational abilities. Eknathji was greatly influenced by the teachings of Swami Vivekananda. He played an instrumental role in the construction of the Vivekananda Rock memorial and the Vivekananda Kendra in Kanyakumari. He established various organisations for the benefits of the society. As a tribute to great soul his birthday is celebrated as “Sadhana Diwas”. 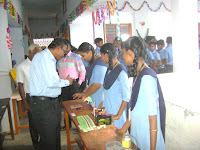 Vivekananda Kendra Vidyalaya celebrated “Sadhana Diwas” in an enthusiastic manner. The programme started at 2.15 PM. It was presided by Mann. Hanumanta Raoji, Treasurer, VRM & VK. The programme was compered by J.Kushum Kumari, the student of IX standard. Shri.M.S.Suresh, B.E.(Hons) Chief Construction Engineer, Koodankulam Nuclear Power Project was the Chief Guest of the programme.

Sri.R.Murugan, the Principal of V.K.V.,Dollungmukh,Arunachal Pradesh and the ex-student of Vivekananda Kendra Vidyalaya,Vivekanandapuram graced the function as a special guest. 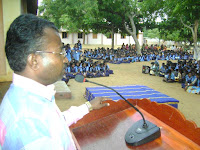 Around 1200 students and 50 parents were present to witness the programme. “Prayer is our direct line with the goal”. The programme was initiated with invocation by VII standard students of Vivekananda Kendra Vidyalaya. “Welcome is a greet in a polite or friendly way”. The welcome address was delivered by Kamali of IX standard. Vivekananda Kendra Vidyalaya conducted various competitions for the students due to the celebration of children’s day and Science day. Vishnu, the student of IV standard sang a beautiful Bharathiyar song which made him to win the prize in music contest and Rishikha Bharathi of XI standard also sang a prize winning song. Vinitha of IX standard delivered the speech of the importance on the day.

Sri. R.Murugan as the Special Guest of the function deliverd the speech about Eknathji. He pointed out that the spirit behind V.R.M. & V.K. was only by “Mann.Eknathji”. He said that Eknathji Ranade was deeply influenced by the teachings of Swami Vivekananda. 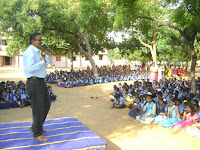 “Speech is human vocal communication using language”. G.S. Vaishnavi of XII standard who won the first prize in elocution competition delivered a speech on “The paper on Hinduism”. The students of VIII standard sang a wonderful Eknathji’s song.Sri.M.S. Suresh B.E.(Hons) Chief construction Engineer, as the Chief Guest of the function addressed the gathering. He remembered his childhood incident. He insisted that the students should understand the concept of the subject and develop their knowledge. He asked so many questions and made the students to say the answers. He illustrated the Chicago address as everyone’s inspiration. 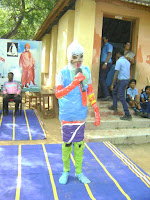 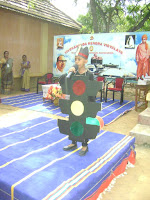 He also suggested that all the teachers should be a role-model to their students. He appreciated and awarded the prize to the student of XII standard Jegadhish for his excellent performance in fancy dress competition in the title “Avoid Plastics”.Antrew Styno of VII standard was also awarded by the Chief Guest for her mathematical calculator model in science exhibition. The students were awarded prizes for their excellent models and experiments in the science exhibition. 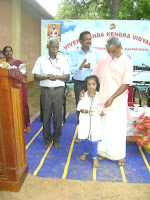 And also prizes were awarded to the winners of Elocution, Drawing, Music and other competitions. Prizes were given away by the president and the Chief Guest of the function. 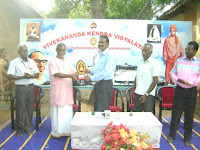 Mann. Hanumanta Raoji presented the memento to the Chief Guest of this function. “Gratitude is the quality of being thankful and return kindness”. Vote of thanks was proposed by Sivasakthi, IX standard student of V.K.V.

The programme ended at 4.15 PM with Kendra Prathana. 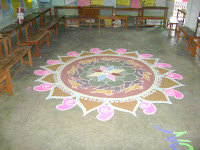 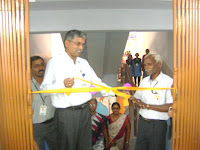 In India, children’s day is celebrated every year on 14th of November to increase the awareness of people towards the rights care and education of children. Children are the key to success and development of the country as they would lead their country in different and new technological way. They are adorable and shine same like the precious pearls. Children are the god’s gifts. The birthday of the first Prime minister of Independent Padit Jawaharlal Nehru’s birthday is celebrated as Children’s Day. He worked great for the well being of children as well as youngsters after the of . He was really fond of children as well as roses. He said that children are like the buds of the garden. He said that children are the country’s actual strength as they would make developed society in future. 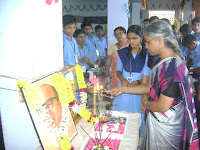 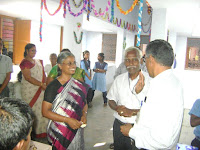 Vivekananda Kendra Vidyalaya celebrated Children’s Day on 14th November 2018 in an enthusiastic manner. The celebration started at 3.15 P.M. and it was presided over by Mann.Radha Didi,Dakshin prant Sanghatak, VRM & VK. The celebrations began with invocation song by 7th standard students. “Welcome is the greatest quality of the mind next to honour. Dhanalakshmi of 8th standard extended a warm welcome to the dignitaries teachers,parents and students. 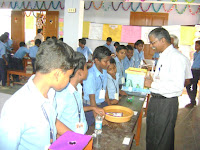 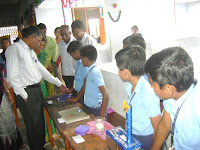 “Children are not only innocent and curious but also optimistic and joyful”Archana of XI standard delivered the speech on the importance of the day. “All children are artists. The problem is how to remain an artist once he grows up”. The magazine which was written by the students of V.K.V. was released by the Chief guest Sri.P.Pandaram M.Sc.,Senior Scientist, Nuclear Power Project Kudankulam. He addressed the gathering. He mentioned that the International Children’s day is celebrated on 20th November every year. 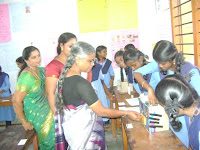 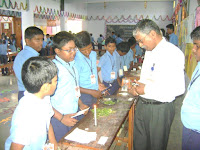 In India, November 14, the birthday of Jawaharlal Nehru’s birthday is celebrated as Children’s day. In Vivekananda Kendra Science day is also celebrated on the same day. He pointed out the students should concentrate their mind on science. They would make as a 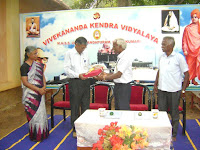 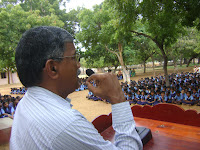 developed country. He appreciated the science exhibition which was exhibited by the students of V.K.V. He specified the necessity of pure air and environment. He explained the need of pure air to breathe, pure water to drink and healthy food for survival. He expressed that our country’s development depends upon the children of the society. He admired the science exhibition which was prepared by the students’ of V.K.V. He appreciated the students creativity. He illustrated Swamiji’s quote about youngsters. He explained his difficulties in his time and facilities available in today’s situation. He congratulated the students’ efforts. “Music is the true musical power”. A group song in praise of to children was sung by 6th standard students. 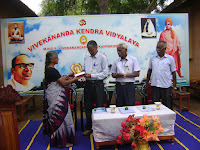 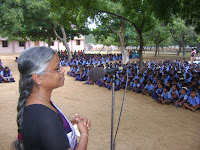 The president of the celebration Mann.Radha Didi delivered her presidential address she welcomed all the participants and appreciated the students’ creativity. She praised the craft work which were done by the students and the presentation of science exhibition. She particularly appreciated the explanation of the girls.
She conveyed her blessing to all the students. Sri.S.Abraham Lingom, principal of Vivekananda Kendra Vidyalaya and Sri.R.Subbiah Nadar, Correspondent of Vivekananda Kendra Vidyalaya presented the memento to the Chief guest. “Be grateful to people who make us happy. They are the charming gardeners who make our souls blossom”. Vote of thanks was deliverd by Pranya of 8th standard . The programme was concluded by Kendra Prarthana, and ended at 4 P.M.