Krishna Janmashtami, also known simply as janmashtami, is an annual Hindu festival that celebrates the birth of Krishna, the eighth avatar of Vishnu. The birthday of Lord Krishna is celebrated with great devotion and enthusiasm in India in the month of July or August. Sri Krishna is considered as one of the most powerful human incarnations of the Lord Vishnu. It is celebrated on the Ashtami of Krishna Paksh or the 8th day of the dark fort night in the month of Bhadon. 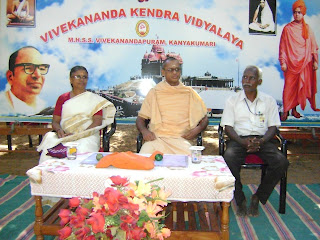 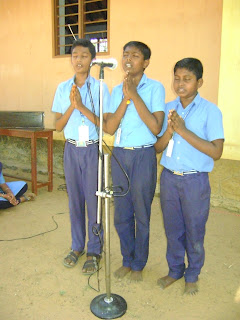 Raksha Bandhan in Sanskrit literally means the tie or knot of protection. The word ‘Raksha’ means protection, while ‘Bandhan’ is the verb to tie. It is an ancient Hindu festival that ritually celebrates the love and duty between brothers and their sisters. On that day sisters tie a sacred thread called Rakhi around their brothers’ wrist and express their love to them.
In our school Gokulashtami and Rakshabandhan celebrations were celebrated in a grand manner. On that happiest occasion we initiated our programme by an invocation song sung by VIII standard students. 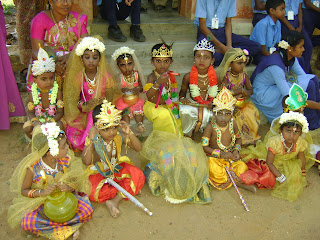 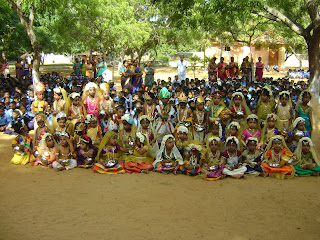 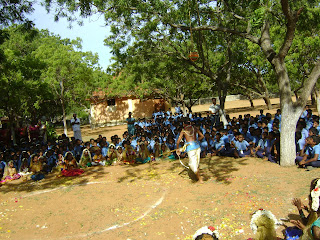 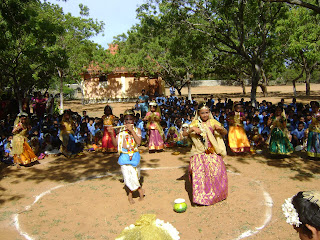 The master of ceremony was presented by Priya Dharshini of XI standard. The welcome address was delivered by Bhagavathi of XI standard. The importance of the day was presented by the student, Rahul of XI standard.
Our Vasudeva family, one of the members of Vivekananda Kendra,  an eminent person, Mann. Radha didi, Dakshinn Pranth Sankadak addressed the audience. She expressed her views about Krishna Jayanthi. She encouraged the little Krishnas and Gopiars who made this function a memorable one. She advised the students to take part in all activities. So, that they can achieve in all the fields. She instructed the students to be the best citizen of our motherland. 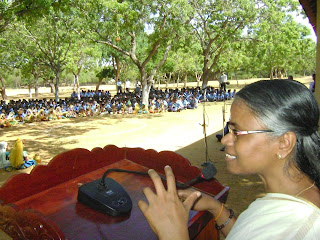 The students of VIII standard students sang a melodious song about the Lord Krishna. Our honourable Chief Guest Sri.Arulji, Incharge of Arsha Vidya Kurukulam, Nagercoil addressed the gathering. He explained about the importance of the months, days and weeks. He expressed the reason of celebrating Gokulashtami in Tamil month of Aadi.He sang a beautiful song about the birth of Krishna. He illustrated many stories about Lord Krishna and suggested how to lead the life in the way of Dharma. He advised the students to support for the welfare of the people. We should not be selfish and we should dedicate our life for others. 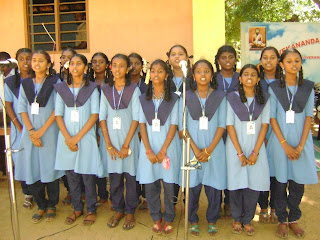 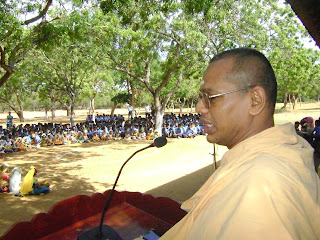 Our school students Abitha and Nishanth of XII standard tied the Rakhi to each other and then to the Chief Guest, Special Guest and Principal. 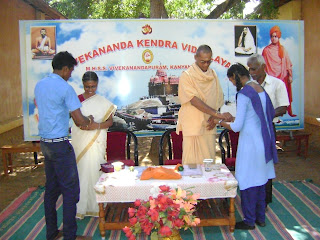 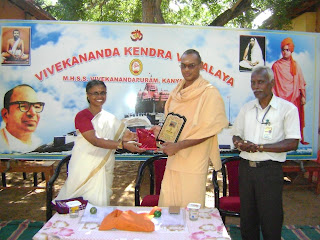 Mann. Radha didi presented a memento to the Chief Guest. The students of II,III and IV standard performed a wonderful dance to the Krishna songs in Uriyadi. Hema Shalini of IX standard proposed the vote of thanks. The programme was concluded with Kendra Prayer. Finally the prasatham was distributed to all the participants. 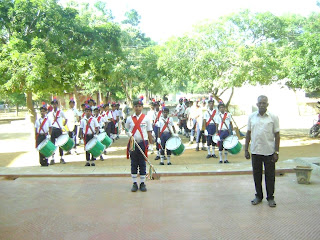 In our school 71st Independence Day celebration was celebrated in a grand manner.  The programme started at 8.30am.  The master of the ceremony was G.S. Vaishnavi of XI standard.  On that happiest occasion we initiated our programme by an invocation ‘Vandhe Madharam” sung by IX standard girls.  We paid our salutation to our Mother Bharath by unfolding our tricolor flag.  The flag was hoisted by Mann.Hanumantaraoji, Treasurer of Vivekananda Rock Memorial and Vivekananda Kendra.  National Anthem was sung by all the participants.  The pledge was delivered by K.G.Kamali of VIII Standard.  The welcome address was presented by our teacher Smt.Hemalatha. 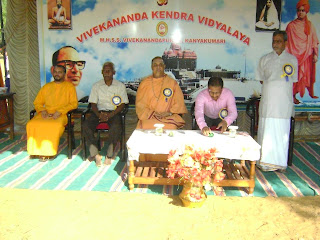 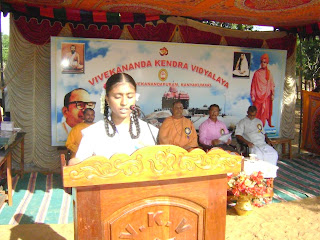 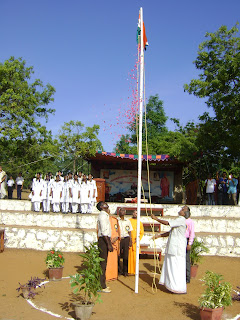 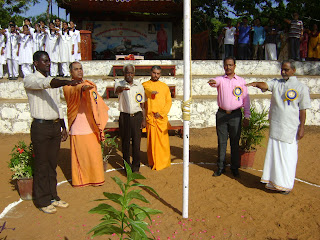 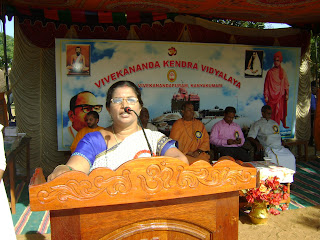 The students of V.K.V. performed a marvelous mass drill and showed the value of united effort.  The students of IX standard expressed their patriotic feelings in the form of a song in our National Language. The importance of the day was presented by S.K.Shalini of XI Standard.  She shared her views about our country’s freedom struggle. 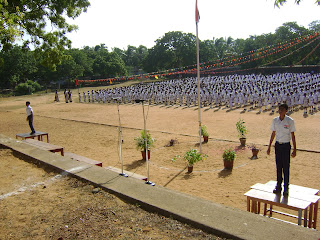 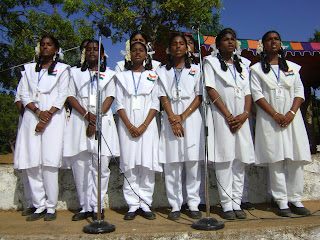 The students of VIII & IX Standard enacted Tamil drama and exhibited their patriotic spirit through a play ‘Puli Thevan’.  Kushum Kumari of VIII standard delivered the speech in our National Language about the importance of the day. 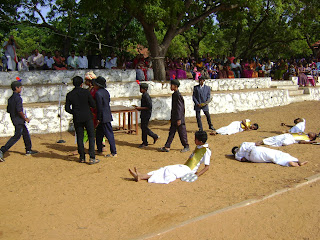 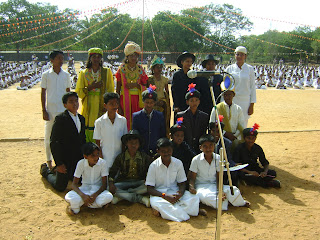 We had an eminent person Poojya Swami Saradhananda the chief of Chinmaya foundation addressed the gathering.  He expressed his views about the freedom of our country.  He spoke about the origin of Indian National Congress.  He advised the students to be united and dedicate our life to our country.  Even after getting independence people are separated because of economical and political reasons.  Every students should consider this and follow the principle of Unity in diversity. 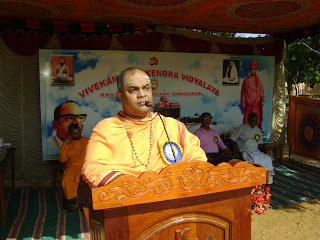 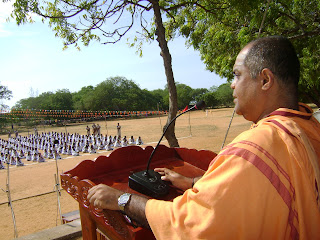 We had an eminent personality, our honourable chief Guest Sri.N.Subramaniyapillai, the Principal of Rohini College of Engineering and Technology at Palkulam. He illustrated some freedom fighters like Gandhiji, Nethaji, Lala Lajapathi Roy etc. He said about the sacrifice of our national leaders who freed India from the strong hold of the British. He exhibited about the struggle of freedom from 1857 to 1947.  We got fundamental rights after the freedom.  He reminded us how our ancestors and fore fathers had sacrificed their lives in the freedom movement.  He instructed the students that they are responsible to handle the emergency condition of our country.  He advised the students to bring peace and joy to our country.  We are the future of our country. And we should be ready to sacrifice everything for our country. 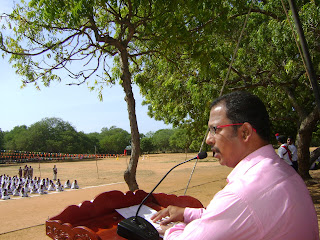 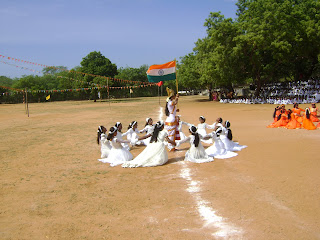 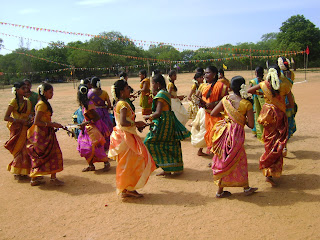 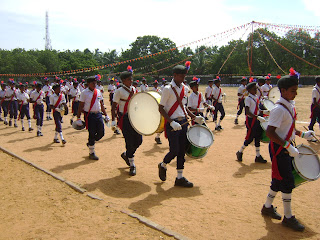 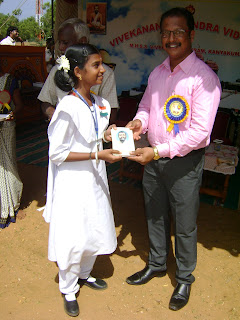 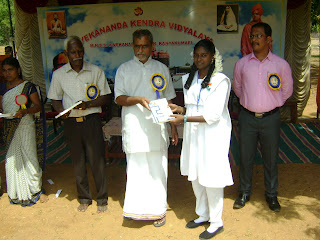 Mann. Hanumataraoji presented the memento to our honourable chief guest.  Vote of thanks was proposed by our teacher Smt. R.Saranya.  The programme was concluded with Kendra Prayer.