Universal Brotherhood Day is observed on September 11 every year.  It marks the commemoration of Swami Vivekananda’s famous speech delivered on September 11, 1893 in Chicago to the delegates of the world Parliament of Religions.  The speech is popularly remembered for its opening words “Sisters and Brothers of America”.  It was a short speech. But its impact was instantaneous.  It is said that after hearing this opening words, the entire assembly gave him an extended standing ovation.

The most precious gift we can offer any one is our welcome.  Sri.S.Abraham Lingom, The Principal of Vivekananda Kendra Vidyalaya extended warm welcome to the dignitaries and the participants of the programme.
“The right word may be effective and speech is powerful”.  The president of the function Mann. Bhanudasji, General Secretary of Vivekananda Kendra addressed the gathering.  He recalled Swami Vivekananda’s message of Universal Brotherhood.  He explained that the speech of Swami Vivekananda made the entire world’s attention to our nation’s rich history and strong cultural roots.  He praised the tremendous Indian Culture.  He also praised the various religious people who were attracted by the inclusive approach of Hindus.  He exhibited that we all must understand the unifying nature of Dharma.  He advised the students to carry forward the mission of Swami Vivekananda and Eknathiji Ranade throughout their lives.

“Music has the power to communicate messages and emotions that words capture”.  The students of Vivekananda Kendra Vidyalaya sang a melodious Sanskrit song.  “Speeches have incredible power”.  Dr.R.Rajesh, M.E., P.hD., The Principal of Rohini College of Engineering, Paulkulam as the Chief Guest of the function delivered his valuable speech.  He mentioned the impact of Chicago address by Swami Vivekananda.  He pointed the poems of the Tamil Poet Mahakavi Bharathi which motivates us the national integration.  He also illustrated spirituality and equality principles in “The Bhagavath Gita”.  He explained the different problems in our society that should be overcome by adaptability and flexibility of every individual.  He noted the Indians role in foreign countries.  He said that the foreign schools provide only education but our Indian Schools provide education with discipline.  He praised the service of Vivekananda Kendra and Vidyalaya.  “Honour has been the reward for what we give”.

The president of the function Mann. Bhanudasji, honoured the employees who have completed their services for ten, twenty and thirty years.  They were awarded by mementos and cash.

The special guest Lion Dr. S.Rajendran, M.B.B.S., D.Lit., MJF, Millennium Lions Governor delivered his precious address to the audience.  He advised the students to observe and realize other’s mind.  He said that mutual understanding make a society move in a harmonious way.  He said that the teachings of Swami Vivekananda are more relevant today than when he addressed the world’s religious of parliament. He advised the students laughing and appreciation make our mind healthy.

An award is not only a great prestige or a mark of excellence, but is also a tremendous boost to someone”.  Vivekananda Kendra and Vivekananda Kendra Vidyalaya organized inter-schools andinter-colleges competitions.  480 students from difference schools and colleges participated in different events like patriotic song, essay, elocution, recitation and drawing.  They won prizes.  Prizes were given by the Chief guest and Special guest of the function.

Mann.Bhanudasji, President of the function presented the memento to the Chief Guest and the Special Guest. Vote of Thanks was proposed by Smt.Sariga, Vice Principal of Vivekananda Kendra Vidyalaya.

The students of Vivekananda Kendra Vidyalaya presented a variety cultural programme.  The audience enjoyed the dance, drama and music.

“Prayer is a foundation for the development of faith courage and happiness”.  The programme ended at 5.30 P.M with Kendra Prathana.

A good teacher can inspire hope, ignite the imagination and instill a love of learning.  Teaching is a very noble profession that shapes the character, caliber and future of our society. Every year in India, September 5th is celebrated as Teacher’s Day to mark the birth anniversary of Dr. Sarvapalli Radhakrishanan who was born on September 5,1888.  A great scholar, philosopher  and a Bharat Ratna recipient Dr. Radhakrishnan was the first Vice President and second President of Independent India.  We have been celebrating his birth anniversary as Teacher’s Day to commemorate his work since 1962. 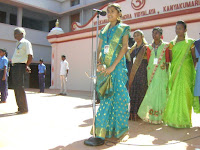 Vivekananda Kendra Vidyalaya Celebrated Teacher’s day with great enthusiasm.  On this day, teachers and students reported to school as usual but the usual activities and classes were replaced by activities of celebration.  Vivekananda Kendra Vidyalaya used to make Half a day for students from 6th standard to 9th standard to enact as teachers.  One hundred and sixty eight students enacted as students – teachers.  Ananya V. Sathish of IX standard, the student-principal and the student Vice Principal, A.Akilan of IX standard guided and directed the students teachers. 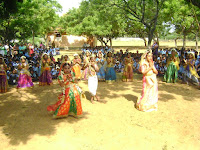 Gokulashtami or Krishna Jeyanthi marks the celebration of the birth of Sri Krishna.  Lord Sri Krishna was born on Ashtami day or the eighth day after Rakshabandhan during the Hindu month of Sravan.  Gokulashtami is one of the India’s most popular festivals celebrated all over India.  As per Hindu mythology, Lord Krishna was born in Madhura Jail on a dark, windy and rainy night.  The day is celebrated with great zeal and devotion.  It is believed that Lord Vishnu was reincarnated in the form of Lord Krishna. 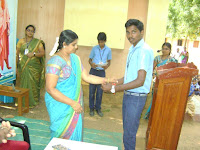 The next celebration of the day is Rakshabandhan.  Rakshabandhan or Rakhi is celebrated on a full moon day in the month of Shravan in Hindu calendar. This festival is known as Shravan Purnima.  On the occasion of Rakhi, the bond of affection existing between brothers and sisters strengthened. 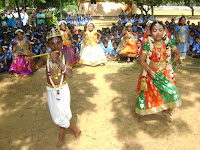 Vivekananda Kendra Vidyalaya celebrated Gokulashtami and Raksha Bandhan in a grand manner.  The programme was started at 2.00 p.m.  It was compered by Ajay of 9th Std.  “The prayer of righteous man is powerful”. We initiated our programme by an invocation sung by the students of VIII standard.  “Welcome is a basic rule of politeness and it signals that we accept the expression of gratitude”.  Sushma, 11th std of Vivekananda Kendra Vidyalaya extended her warm welcome to all.  “Without freedom of speech there can be no such thing as wisdom”.  Rishika Bharathi of XI standard delivered the speech about the importance of Gokulashtami and Raksha Bandhan.  “Where there is devotional music, God is always at hand with his gracious presence”.  The students of VII and VIII standard sang a beautiful Lord Krishna song in sanskrit. 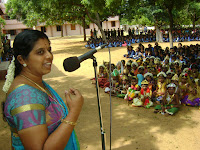 The Chief Guest of the function, Dr.Krishna, M.Sc., B.Ed., P.hd., the first Chairperson of Amirta College of Engineering and Technology, Erachakulam addressed the gathering.  She appreciated the students as well as the teachers, who are an effective part of the society.  She explained that the Raksha Bandhan marked the relationship of brothers and sisters and the meaning of Rakshabandhan.
She quoted Swamiji’s powerful Chicago address which he started by “Sisters and Brothers of America”.  She advised the students what we expected from others, the same thing we have to give others.
Then she narrated the story of the Mahabharath Saguni who was the best example of evil and Lord Krishna who was the best illustration of Good.  She told the life is full of struggle and we should not leave our good principles in any circumstances.  She advised the students that we should observe and analyse ourselves.  We should be confident in all our activities. 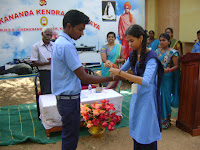 The students, Anish and Pratheeba from XII Standard tied the “Rakhi” to the Chief guest and the Principal. 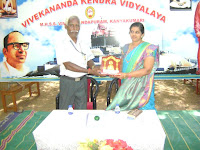 Sri Abraham Lingom, the Principal of Vivekananda Kendra Vidyalaya presented the memento to the chief guest.  “Dance cherishes the moment”. 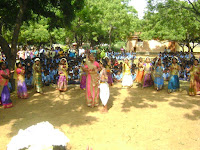 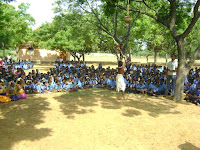 The students of Vivekananda
Kendra Vidyalaya were dressed as Radha and Krishna.  They gave a traditional touch to the celebration.  They danced to praise Lord Krishna.  They performed Uriyadi in an enthusiastic manner.
“Gratitude creates a vision for tomorrow”.  Akilan of IX standard delivered the vote of thanks.  The programme was concluded at 4 pm by Kendra Prarthana.