In our school 50th Anniversary of dedication of the Vivekananda Rock Memorial and Universal Brotherhood Day celebrations were celebrated in a grand manner.  The programme started at 3.15pm.  It was compered by Smt.P.Jeya, Teacher of Vivekananda Kendra Vidyalaya.

On this happiest occasion, the programme began with lighting the lamp by our honorable Chief Guest Sri.Prashant M.Wadnere. 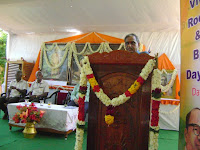 The function was presided over by our Mann. M.Hanumanta Raoji, Treasurer of Vivekananda Kendra.  He addressed the audience.  He remembered the speech addressed by Swamiji at .  He expressed the importance of the holy land Kanyakumari.  He said about Swamiji’s visit to Kanyakumari.  He exhibited that the confidence of Swamiji’s strong determination and resolution.  He specified the Sanathana Dharma.  He illustrated that the address changed the point of view of other countries and got recognition from others.  He proudly said that the credit of the development of Kanyakumari is due to the Rock Memorial.

The students of VIII aand IX standard sang a Sanskrit song about Eknathji.
We had an eminent person Sri.Prashant M.Wadnere as our Chief Guest and he addressed the audience.  He started his speech by narrating a small story from Swamiji’s Speech at .  He exhibited the famous speech of Swamiji.  He advised that all should read the inspirational words of Swamiji and not to be a narrow minded person.  He quoted Swamiji’s thought ‘Each soul is potentially divine’.  He expressed about the importance of ‘Service to humanity’.  He insisted the students to work for our society and to give importance to education.

The Kendra employees who had completed their ten years of service were honoured by our Man.M.Hanumanta Raoji, Treasurer of VRM & VK.

The special guest Dr. R.Ramakumar addressed the audience.  He praised the attitude of our teachers.  He exhibited Swamiji’s divine power and also the valour of Eknathji.  He illustrated the incident from the life of Sri. Rama Krishna Paramahamsa and Swamiji’s Meeting.  He explained the incident of Swamiji’s religious integrations through the relationship of Sulfikar Ali in the .  He advised the students to develop their helping tendency. 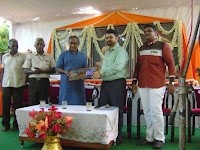 Mann.Hanumanta Raoji, President of the function presented the memento to the Chief Guest and the Special Guest. 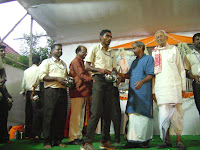 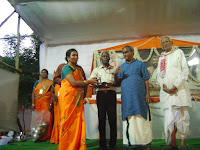 Vote of Thanks was proposed by Smt.K.G.Sariga, Vice Pricipal of Vivekananda Kendra Vidyalaya.
The Programme ended at 6.45pm with Shanthi Manthra.