“God could not be everywhere and therefore he made mothers”

Mother’s day is a day dedicated to all mothers, celebrated every year to honour the mother and motherhood.  Every mother plays a great role in the life of their kids from giving birth to making them a well human being.  It is only mother who shapes the child’s character and then whole life. 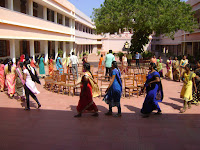 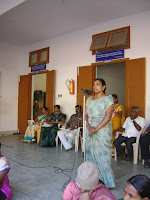 Some of the mothers who participated in the competition and games shared their experience.  We had an eminent personality Smt.T.Viji, Teacher of Govt. Hr. Sec. School in Agasteeswaram, as our Chief Guest who addressed the gathering.  She recalled the poetic lines of Mahakavi Bharathiyar and spoke about the various competitions conducted in our school on account of Mother’s Day celebration. 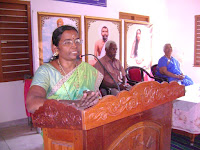 She expressed her views about Shri Rama Krishna Paramahamsa’s qualities who treated all the women including his wife as a mother.  She encouraged the mothers by narrating various incidents that happened in Australia and Japan.  Then she explained about the love of Edison’s mother and Veera Shivaji’s mother.  She exhibited Gandhiji’s promise to his mother.  She advised the mothers to spend their time with their children when they return from the school.  She instructed them not to give electronic items.  She insisted them to cultivate the habit of saving money, to develop the habit of reading books.  So the children will develop the good values.  She emphasised the children to think positively and to establish the greatness of the school.

Various competitions like Rangoli, Music competition, preparing healthy food, musical chair, lemon and spoon, number games were conducted in our school for mothers.  They participated enthusiastically and won prizes.  Venkateswari Teacher read out the name list of the winners in the competition.  Prizes were given away by the Chief Guest and the Special Guest. 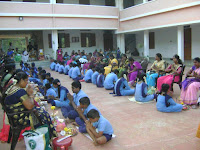 Smt. Janaki Pushpam, Tirunelveli Branch, RDP, Vivekananda Kendra as our Special Guest addressed the gathering.  She explained the importance of Mathru Pooja.  She spoke about the Tamil poet Kavimani’s famous poetic lines about women.  She shared about Swamiji’s visit to Chicago. 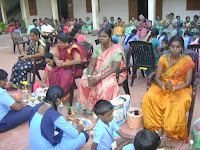 She spoke about the tradition of India, how the children got blessing from their parents and how rarely they are getting the blessing in the current era. She exhibited the Mathru Pooja performed by the Kings to the Tapsvi Saint.  She narrated a small incident about the appreciation of a mother. 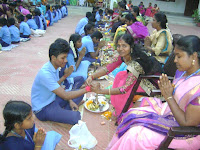 She instructed the mother to develop their children with humanity, discipline, good values and tradition.  She advised them to visit temples weekly once and asked them to serve the country.

Mann. Aparna didi presented a memento to the honourable Chief Guest and the Special Guest.
Shri. Manikumar Sir expressed his views about the importance of Mathru Pooja.  Our school students participated in Mathru Pooja and performed the pooja for their mothers by chanting the slogans infront of the Goddess Saraswathi. 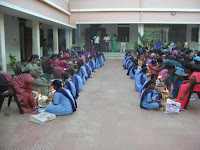 The Vote of thanks was proposed by Smt. R.Selvi, VKV Teacher.  Finally the programme culminated with Shanthi Manthra.