Janmashtami is a hindu festival celebrating the birth of Lord Krishna. Krishna is considered as an avatar of the God Vishnu. The birth of Krishna took place on the eighth day of the dark fortnight of the month of Sharavana. He was the eighth son of Devaki and Vasudeva. The incarnation of Krishna marks the end of darkness and rooting out of the evil force dominating the earth. He is known to be blue in colour where blue like the ‘sky’ marks the infinite potential and power of the Lord. 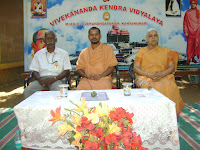 The next important celebration is Rakshabandhan. Rakhi is a sacred thread embellished with sister’s love and affection for her brother. On this day of Rakshabandhan, sister’s tie rakhi on the wrist of their brothers and express their affection  to them. After receiving the rakhi from a sister, a brother takes the responsibility of protecting his sister. The sister pray for the well-being, success and safety of her brother. 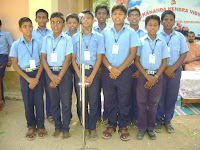 We initiated our programme by an invocation song sung by the VIII Standard boys.
The welcome address was presented by Abirami of IX Standard. “Lord Krishna’s birth and life had a profound impact on Indian culture, philosophy, civilization. And the self actuation towards a noval cause between a brother and sister is the theme of Rakshabandhan”. Bala Sindhuja of IX Standard delivered the speech in Tamil about the importance of the day. 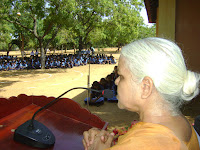 Mann.Rekha Didi, Joint General Secretary of Vivekananda Kendra addressed the gathering. She shared her views about the origin of Rakshabandhan. She expressed her thoughts on the formation of Rakhi and the relationship between the sisters and brothers. She exhibited that Lord Krishna is a real teacher and reminded us the ‘Srimat Bhagavat Gita’. She instructed the students to bringout their knowledge and also asked them to develop their personality. She adviced  the students to give importance to ‘Srimat Bhagavat Gita’. 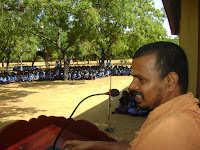 “The enchanting music of the flute played by Krishna is symbolic of divinity”. The students of VIII Standard sang a pleasant song. 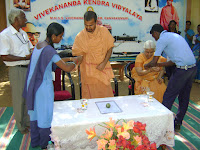 Our Chief guest, Poojaneeya Swami Athma Swarupanandaji, Chief Secretary of Hindu Dharma Vidya Peedam, Vellimalai addressed the audience. He expressed his views about the importance of Krishna Jeyanthi. He  narrated a story from Krishna leela. He reminded us about the Gurukula system of education in Lord Krishna’s life and also about the teachings of the elders to their young ones in their daily activities. He instructed the students to do their work with concentration of mind. He adviced the students to become great as their wish in their life. 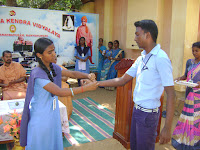 “In Indian tradition the frangible thread of Rakhi is considered even stronger than an iron chain as it strongly binds a brother and a sister in circumference of mutual trust”. Our school students Bhavani and Gowtham of XII Standard tied the Rakhi to each other and then to the Chief guest, Special guest and Principal. 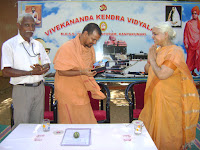 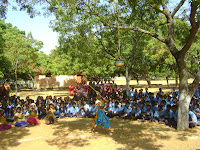 The student from I to IV Standard performed a beautiful dance to the Krishna songs followed by the Uriyadi.

Rishika Bharathi of IX Standard delivered the Vote of thanks. The programme concluded with Kendra prarthana and then prasadam and rakhis were distributed to the students and all the participants. 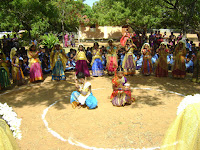