The most auspicious day when we got republic to govern ourself is on 26th  January 1950. We got our reign as the formulae tells “ For the people, By the people, of the people. 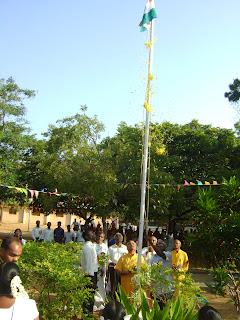 In rememberance of this day 26th January the whole country celebrates Republic day with joy. Our school also takes a major part in this day’s celebration. We began the program at the time near to the dawn of the day. As the sun rose high in the sky, Our Republic day too began to bloom with the children appearing in white uniforms. 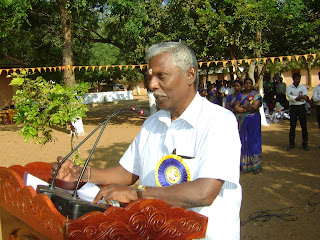 The function began exactly 8.30 A.M. The first start of the program was the song of Vandematharam, which began to induce the sense of freedom in our minds.
Followed by it was the flag hosting by the honourable Chief Guest Dr. E.Ponnulingam, former principal of Vivekananda Arts and science college, Agasteeswaram. 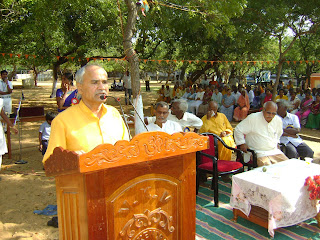 National Anthem was sung after the flag hosting to make reverence to the freedom fighter, country and national flag.
We felt proud to take the pledge by which we could express our sincerity, love, reverence, worthyness and selflessness to the country.
Welcome address was presented by Smt. Venkateshwari  teacher. Her welcome speech was so excellent by which all the people on dias and the gathering felt happy to be a part of the function.
A wonderful Hindi song was sung by our students. The language and the music both were wonderful and smoothing to our auditory sense. 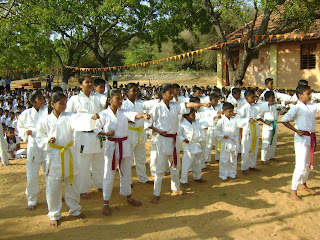 Importance of the day was spoken by sister Shalini of 9th standard. Her speech brought out all the reasons by which the day gained its unique importance.
A song in Tamil was sung in praise of the country. The pleasant voice and meanings of the lines were marvelous and of whole worthy. 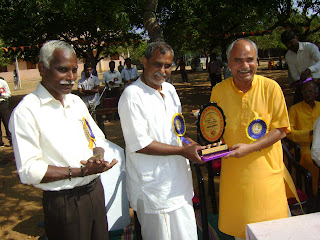 A beautiful mime was presented by our students. The mime depicted the life of major Mugunth Varadharajan. It brought out the struggle that each Indian soldier undergoes as a freedom fighter. It also brought out the family afflictions related to them. The tragic end brought tears in views of spectators.
Chief Guest Dr. E.Ponnulingam gave a wonderful speech in Tamil language. He told about the struggles undergone by freedom fighters. He also motivated students to be truthful and patriotic.
Followed by Chief Guest address was the address made by Special Guest Gourji head of all world Gayathri Parivar. He spoke about the need to have national spirit. 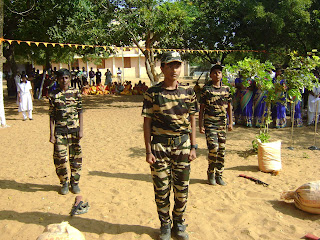 Prizes  were awarded for students who performed wonderfully in E.A. competitions. There efforts and achievements were appreciated by awarding prizes by Chief Guest and Special Guest.
To make the program a memorable one, memento was presented to Chief Guest by Special Guest.
Vote of thanks was presented by Sree Venkadesh Sir. All the dignitaries and gathering was thanked for their kind co-operation through out the program.
The program was winded-up with Kendra Prayer.

Email ThisBlogThis!Share to TwitterShare to FacebookShare to Pinterest
Labels: 67TH REPUBLIC DAYCELEBRATION The most auspicious day when we got republic
Location: Kanyakumari, Tamil Nadu 629702, India